Bal mela is an activity organised by my school (Fountainhead school) every year. The main aim behind organizing such an event is to give opportunity to underprivileged to relive their childhood and to spread smiles. All the activities that we had planned for were planned in a way that children would enjoy to their fullest.. This event was a huge success because of a lot of reasons, one of which was the synergy that we had among ourselves. From planning to executing the whole event every decision that was made involved opinions of everybody from the organizing committee. A lot of students including me were a part of this organizing committee. In order to make this day a memorable one for the children, we had planned for activities such as face painting, dancing, tattoo making etc.

After putting in so much efforts, 13th Feb 2016, was the day for the event. Personally I wasn’t feeling good about the event because I was very nervous as to how will I manage to handle 40-50 kids at a time. Also what made me nervous was, will I be able to take them back into the times of their childhood. Because what I thought earlier about underprivileged kids were that they might not be very enthusiastic when it comes to mingling with new people and that they might have low self esteem. However, I was wrong.

I was into the department of my interest;’running stage’. We had to make the children do freestyle dance. I was really excited for this. However, what came up as challenge for me was to perform in front of 40-50 people without preparing, so that the children could see us and do the same. Initially I wasn’t very comfortable dancing in front of so many people, however as time passed I could make up to the challenge and was able to overcome it. During this process I was able to identify one of my strengths I never thought about and that was to be able to dance on the spot without having rehearsed.

Something that all of us had to keep in mind was the ethics of our choices and actions. We had to make sure that we treat every child equally so that none of them’s feelings get hurt. In a nutshell, this was an amazing experience and it gave me a lot to remember. What gave me true happiness was seeing the children with smiling faces throughout the event. This was a relief for me as my only purpose was to make them happy and give them a chance to enjoy all the stuff that we do. And something that I took as a lesson from this experience was that one can make through anything if he/she has the dedication and desire to do it. Nothing could give me immense pleasure than knowing that we as a team made it happen,and fulfilled our aim. 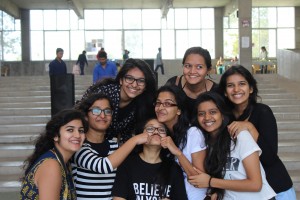