As an ESS (one of our IB subjects) student I am well versed with the current environmental conditions on Earth and therefore the importance and the exigency for afforestation. The government of Gujarat initiated a project to build “Artificial forest” in Vansda. The artificial forest was named as “Janki van”.

We started off at around 7 or 8 in the morning and might have worked for around 4 to 5 hours approximately. We started with getting briefed about how they had planned to plant trees around that patch of land and how things were supposed to be done.

We were soon divided into two sizeable groups and as soon as we started our respective jobs starting with planting saplings and then later going on other activities like watering the saplings, adding fertilizers and covering them I realized that planting seeds were not a child’s play. It needs proper skills to accomplish this task properly ( for instance: the saplings should be watered correctly, The saplings should be planted perpendicular to the ground or right amount of fertilizers should be given). It was very tedious and strenuous task and however I knew that planting is something that does not belong to my comfort zone (as I don’t like working in soil especially wet soil and water) but then I made myself understand that few tasks should be done not because one enjoys doing them but because that are essential, crucial and of significant value.

Through this, I learned to step out of my comfort zone for things that were necessary without considering my personal benefits. This plantation activity forced me to believe that no task is small or big and hence made me respect the workers working (changing my ideological belief that planting is an easy job) with us because I now knew how difficult their job. There was one instance when I was so tired and frustrated as it was a very tedious task and I was exhausted that just wanted to skip the responsibilities given to me ( like at time of helping the other group in their jobs) so i out of vexation i did not do the work like it was supposed to be done (placing plants at  proper distances from each other) but then I reminded myself that this was a blessing in disguise ( as it would help us in future) and not only this but also how important teamwork is and that worked an incentive to help my peers who were as tired as me. This also portrayed our commitment towards our job as even though we were tired we continued doing our job in order to accomplish our objectives and took very limited breaks.

At one end we were doing something good for the environment but at the same time the plastic bags that were used to transport the saplings that we planted were going to be disposed of somewhere. ( This is another ethical issue that I came across because at one end we plant trees contributing to the environment and at the other end we dispose of plastic we will cause more harm to nature)

At the end what mattered was that It taught me few very important lessons of my life and also helped me it completing two criteria of CAS (activity and service). 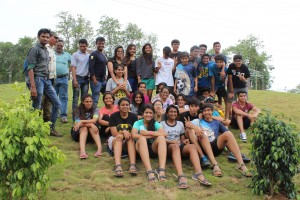 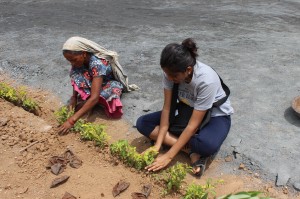