On my way to my first (out of school) basketball competition ever, I was ambivalent. I was never a fan of sports, so this competition held an emotional relevance to me, as it was my personal fight towards my disinterest in physical activities. It was difficult to stay calm, mostly because I knew it wasn’t going to be an easy nut to crack, nonetheless, I had some faith because we were very strong as far as team work was concerned. Turned out, both my claims were absolutely correct, it was a difficult first match but our coordination and skills helped us win.

I was hardly allowed to play in the second match because I was relatively a new player and our opponent team was last years champion. Observing the game for 30 mins made me realise a lot of things about me and the sport. I had always believed that sports were all about aggression and roughness, and that is what I felt when I wasn’t allowed to play for the entire match, I was angry and charged up to fight with the coach. However, turn of events and emotions took place within me when the best player in the team approached me in the half time and asked me areas the team had to improve in to better the score. This suddenly made me realise of the misconception I held throughout, sport was about calmness and strategy, I realised that in order to become a better player and a better teammate, I must not only practice the skills of the game, but also of being an observant and calm. So that’s what I did for the rest of the day, observed each game closely, reflected it to my teammates, created strategies, happily stayed as a substitute when required and gave my heart and soul in every minute I was in the game.

This experience taught me a lot about real teamwork and importance of knowing your strengths and weaknesses to best support your team. It not only made me physically fitter about also broke my paradigms about sports. 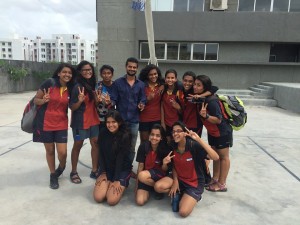