This event, for me, was a major doorway to understanding myself and others and to learn extensively throughout the process.

Initially, there was this inertia in people of getting serious about things and also we, Muskaan and I, were accountable for the blame. We did not gather details about the event – what date is it on, how much does each group have to perform for, what the theme is, and suchlike. After we were announced the event coordinators, we had a almost 15-day vacation where we should have planned the basics at least. This led to a wastage of the starting few days which we did regret later.

I was anxious of how we are going to put everything in place. During the initial days, I also had to attend a wedding so I was not very much involved in the process. But, Muskaan helped to make everyone pull up their socks and start working. I was glad she was there in my absence and things didn’t go haphazard. Even our teachers collaborated in planning and ideating which was helpful.

The way I led the event was very democratic in nature – made everyone involved in the decision-making process, made them formulate their own ideas and then update me, diligently listened to their ideas, gave suggestions but did not criticize or impose any of my ideas. The outcome was that they worked enthusiastically in their respective areas.

However, I didn’t like the idea of making the parents do a hands-on activity after the entire performance, which the VA group insisted upon. And turned out, that it actually didn’t worked out.

I feel I should have been more decisive and authoritative if I strongly felt it was a bad idea.

I believed I’m creative so I tried to come up with a theme myself, and after many failed attempts, I came up with the idea of ‘prison’. This was one key feature to make the event extraordinary. My bus mates helped to develop on this idea and I considered it important to acknowledge them. My mail to the class and teachers read “Pranjal, Jayani, Muskaan and I, on discussion, have finalised the name and theme for the DP mela”. I realize how good it feels to have our efforts acknowledged and I did the same from my side.

I learned this very important thing to always take blame and always share credits, whenever you should.

I did not only plan and designate responsibilities, but I was actually also a part of two performances – sang a song for ESS, and give an introduction for the Hindi video. This reduced my stage fear and boosted confidence to an extent. Moreover, I designed the invitation letter and invitation cards, thanks to my creative writing and design skills. I worked along with them rather than telling them to work. I guess this way everyone liked to work for the fest. 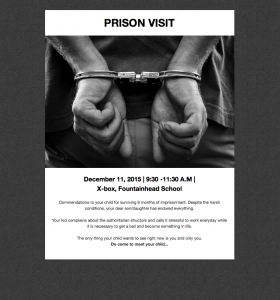 We also selected the host, based on emotion and logic – which meant one host was experienced while the other was given an opportunity. I did a lot of work such as printing the cards and photographs, helping in designing the banner, creating the setting, being the welcome-in host and all the many little last day chores. I was completely involved in the last two days, coordinating with everyone and I literally did not even have 5 minute spare time.

I’m proud to have put in all the efforts and have worked hard for it. 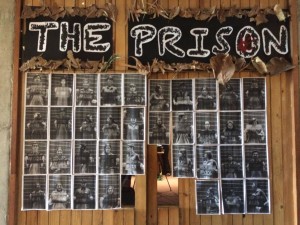 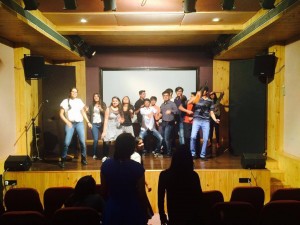 I went to KV central school for plantation. I never did plantation in my life, so I did not knew what tools are needed and what is the method for planting.

The tools were new to me, so I learnt new techniques to use the tools and developed a new skill. I planted four to five plants. Planting a tree alone is difficult because you can’t hold the tree and also put soil on it, so working together with my friends was helpful. Global warming is increasing in the world and is a significant issue, so participating in this activity also helped me participate in globe significance issue.

When the term ‘CAS Project’ came to my mind, I always wanted to do something unique, something out of the box. So, obviously, my mind had already screened out mainstream options such organising sports tournaments, art festivals, charity events, and so on. Meanwhile, I enrolled myself for ‘Maker’s Space’ as part of my AS(Arts Special). I realised that I could build/make something extraordinary and out of the box with the opportunity I had with Maker’s Space. This would in turn, fulfill the activity and creativity components of CAS.

Maker’s Space provided us with a platform where in our creativity could be nurtured. I had 3 other classmates with me in this program. However, one of them decided to go solo. The remaining two(Aarsh and Pranjal) and I decided to team up and create something three times the capacity of an individual(considering that we were three people). Maker’s Space started out in the last week of July 2015 and ran until Feb 6, 2016, which was the date of our AS exhibition. In this exhibition, we were supposed to display our creations to parents, students, teachers and other visitors. We figured out that we had enough time to explore, think and finalize our project. For three months, our minds wandered like a pendulum from here to there, in search of ideas that were in our budget and realistic in nature, while acknowledging time constraints. Fortunately by late Oct,  we zeroed down onto creating a Foosball table. This meant that we had 4 months to execute our project. In November itself, we finalized the design after rigorous searching and brain storming. After inputs from our supervisor, we created a blueprint and ordered materials accordingly.
END_OF_DOCUMENT_TOKEN_TO_BE_REPLACED

With the upcoming Organ Donation Day, me and my group decided that we must spread awareness about how many lives can be bettered and saved by taking a small pledge of donating organs after death. We decided to make a video first to reach people through social media, however, we soon realized how we would not be able to engage the viewers as nicely. Besides, we wanted to take their pledges, to make sure they have been influenced. Therefore, we collaborated with an NGO called Shrimad Rajchandra Love And Care and decided to do a street play. For an audience, we decided to do it in U-Turn on an early Sunday morning. There were many challenges including group members backing out at the last minute and waking up very early on a holiday and rain which tried to stop us from doing the play. But with resilience and will, and because of the fact that we believed in this cause and its global significance, we did not give up. The audience was discouraging at first too. People just walked by without noticing our play. However, by shouting and acting our guts out, we got some success in spreading awareness. Over a hundred people pledged their organs! With collaboration and support in what was left of our group, and with belief in the cause, I believe we did a wonderful job planning and initiating this project. For me, this was also my first street play – therefore, making the script and directing the play was challenging too. Co-ordinating the cast and props was fun, and I think I would like to initiate more such small projects in the future! 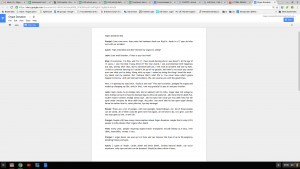 I took part in a tree plantation session organized by nature club. It was a fun activity as we got muddy and dirty in the rain, planting trees in holes already dug out for us, and then shoveling mud over it again. Then we hammered bamboos next to those plants and tied them together for support. We had to remember to not litter the black plastic in which the plants were originally kept. We learned that these were bird-friendly trees – ones with flowers and fruits to provide birds with nectar and food. These not only help the environment by taking in carbon dioxide and tackling global warming, but also helps survival of many bird species. I collaborated with friends to plant the bigger plants, and also had a lot of fun with friends. It was an amazing experience, especially because we worked towards an issue with global significance. If all of us take such little steps, we can do such great things in preserving the environment, and many other issues for that matter! The rain was a hindrance. It slowed us down, made transport to and from the venue hard, and also formed puddles. We mustn’t be very conscious about staying clean as such, but I think that did make us go out of our comfort zone. It was a nice activity overall! 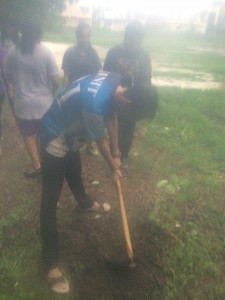