Flash mob – Education for all 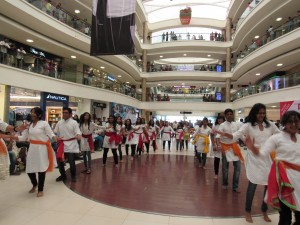 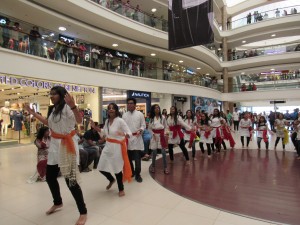 To promote the goal 2 ‘Achieve universal primary education’ of the UN millennium development goals, the group ‘A step towards human (ASTH)’ was doing a flash mob in a very renowned mall of the city. To spread awareness on a topic like ‘Education’ (which plays a very significant role and is an important issue all around the globe) they decided to present it in a creative manner, because the audience is always attracted towards art. The flash mob started with a dance followed by a speech, then a drama and at last again a dance.

The preparations were going on from weeks, everyday the rigorous dance practices were held. It was difficult for me to attend all the practices, but because of my commitment I had to manage my time. I had to put in extra efforts, because I am not that good at dancing. I developed my dancing skills in the process. We were all confident and were thorough with our dance on the last day. Along with excitement, I was very nervous. After a long time, I was going to perform in front of a huge audience. During the time of our performance there was a large audience waiting for us. My Mother and my sister were also there to encourage me. Just as the music started, we all were dancing on our tunes, but due to lack of space we were all banging into each other. I was proud of myself because I didn’t forget any step in the middle of the performance, and that I gave my best to make it successful.

The limitations were that were was a problem in the sound system. People were not able to hear our speech and the music too. This was a big led down for the whole group. Though we were able to generate some amount to fund, it didn’t meet upto our expectations.
Out of the six thinking hats, the green hat which is about creativity and the red hat which talks about feelings played an important role in this particular activity. Without creativity it was impossible for us to persuade people, and as our motto was to spread awareness and raise fund, we were dealing with human emotions and therefore considering feelings was necessary. Ethical aspect of the activity was related to the usage of the fund, and the goal of education itself. How justified is it to have differences in something as universal as education? 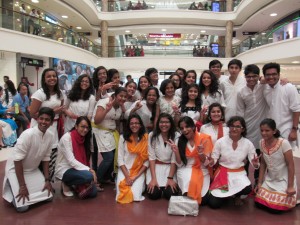