It’s been a year of learning cooking, once a week in my school. It was an activity that I took as my arts special classes. As I already knew how to cook, there were instances where I was the only one been praised for my perfect work (“practise makes a man perfect”). I had learned many recipes. We had been taught about +50 recipes.

I knew many of them, but the challenge in here was to do it in a different order then I usually use! For example, in the beginning we were given the task of making perfect round Roti (Indian bread); and the tools which I used while making it at home and the technique was all different, which resulted in taking lot of time and also there were times when it use to get it torn from the middle, because of applying a lot pressure (physics everywhere, when will it leave our backs!!!).

In the initial days, we didn’t have our kitchen ready and were given a temporary space (a space for only two people to work, whereas we were about 15) to work. There also were times when we all (15 people) had to cook together and many of us had no work to do except for watching (which is a tedious and insipid job!). At this point, many of us started to have issues with each other as we all wanted to work and learn more than the other gets to, but at the each end of the class when we are done with cooking we feel good about it and these fights don’t seem to be a problem (coz as we say, “When ends well, All’s well”).

By the end of the year, others (my companions) had left the class because of their exam preparative leave and therefore Disha (my friend) and I were the only ones left to learn. At first we used to think how we will be able to manage but then it turned out that because of their leave we had more work and we could learn more and connect better. There were a few recepies that I had also tried at home after learning in the class. The best part about it was that they were easy to cook and as delicious to eat.

At the end of the year, we have to showcase our skills and knowledge learnt throughout the year. So for this year, we (all the students learning cooking in art special classes) decided to keep live kitchen, where we will sell food (Frankie, Mexican Bhel, and watermelon juice) that we had learnt during our classes, and this all was recorded and projected on our dinning area’s LCD screen, with it visitors were also allowed to have a walk inside the kitchen while we were working. For the same event, we were given chef coats, and name tags (this made me feel like a real chef! It had felt so good!). I was assigned to cook Frankies with my juniors. At the time of rush hours, I was actually working with two pans, 10 ingredients, and a lot of pressure of piling orders for Frankie.

I had loved this experience more than any other and felt good after doing so. 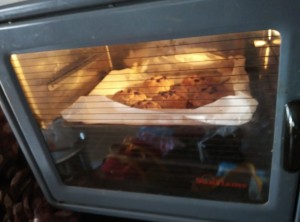 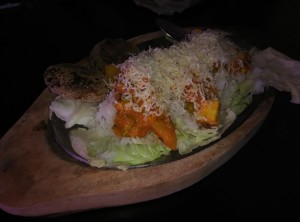