I had taken a three month course of learning and improving my different types of dance skills. By the end of the course I had learned a couple of dance forms such as Contemporary, Jazz, Salsa, Bollywood, hip-hop, Lyrical. When we were learning hip-hop and lyrical, that was the time that I enjoyed the most, also I use to find myself giving so much effort, while learning, that my cloths used to get drenched in sweat. I use to go 5-6 days/week right after my school use to get over. Due to this there were times when I was too tired to do dancing, although by the time the class was about to end, I would have gained so much energy and would have rejuvenate so much that I would want to do more.

At the end of three months course coincidently we had a dance carnival (something they did every year at this time of year), where we were going to perform. For that, we had been preparing from about a month before final recital. We were doing contemporary and had to perform in front of an audience due to which we had to bring our dancing to a whole new level and had to practise hard. Me being one of the non-dancers in our batch, there were step that were too difficult for me to do; and even though, my body use to ache due to unusual movement of body and tight schedule, I overcame the problem and was able to do the steps correctly; although it took me about a week or two to do so.

As the days passed, I started to realize the efforts everyone was putting in, just to make this carnival the perfect one, and for the same we (as students and performers) had to begin being on time. It was difficult, as I had to make it really quick with eating my food and getting ready (which is a challenge for all women existing on this planet), but I use to try my best. The most challenging thing was my exams and the show. The show was in between the days of my examinations and because of it I had to really be punctual and not waste any on my precious time. There were times when we had to meet up with all the batches and practise on the stage, on those days I really had to take my books with me just so that I don’t miss any of it.

On the day of the carnival, I could see all the people so excited to do their best and enjoy, off course. As the performances were getting over and ours was getting near I could really feel my heart beating a second faster. Our performance was one of the most praised ones (after all we all disserved it, come on! We had worked hard for days).

Because of this activity, I had started to make new friends and I also use to enjoy my time spent in the evening after so much of work out; another way for me to sweat while enjoying and keeping my not so fit body, fit. All though, I had joined the dance classes for completing my CAS requirements, I enjoyed my classes so much that I continued for more. Over all, after so much sweat and work out and fun and dancing and making new friends, I enjoyed being part of this amazing experience. 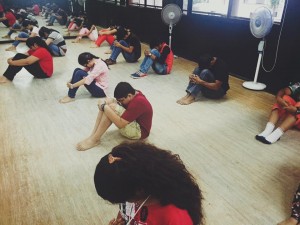 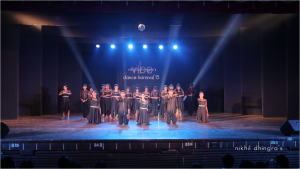