Reflection on volunteering in Kalakriti:

It was an inter-school Arts competition, which included drama, dance, music and visual arts as different areas where people could participate. Our school was the host of the event and hence had asked me to do anchoring. I had volunteered to help as an anchor, but also ended up in helping with registrations. I had an option to do anchoring at many different places, but as I loved to see different dances and always use to end up being there, I decided to anchor at the place where dancing competition was held. I had to work with one of my friends, and so that I get equal opportunity to do anchoring, we decided to split our work.

When we had reached the venue, I got to know that we were having troubles with registrations because of which we had to wait before we get the dancing competition started. So instead of just waiting around, I decided to end the process of waiting by providing my help. Due to my help one of our teachers got free and was able to do the rest to start the competition. I had missed a few dances because of this and also parts of my anchoring work (which I feel sad about) but it was one of the interesting jobs and later I felt happy that I came to good use, which fulfilled my intentions, to come and help here, properly.

The worst about this event was that I had to wake up at 6 in the morning to be on time and had to speak and help continuously for about 8 hours without stop, due to which I ended up having a sore throat and drinking warm water for the next few days. It was kind of a tiresome work, but I learned about registration processes a bit.

I had an experience of anchoring in the public once before and hence I thought it would be similar, adding fillers, entertaining audience and so on; but to my satisfaction I got to know that my part of job included just speaking out the names to audience about who is coming next and see to it the judges know that too. After knowing this piece of information, I felt good that I had gone up to helping in with registrations. I enjoyed my time being there, I got to see many dance, and be with people. Overall it was a good experience. 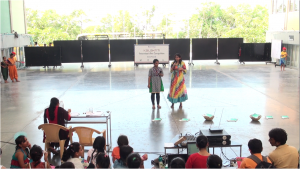