An activity, which I have always enjoyed, is oratory. Recently, I had participated in young orators 2016, where I secured the second place in the semi finals and the second place in the finals. This competition is held on a wide scale consisting of about 100 participants from three different cities, so I had to carefully plan my speech over a period of 2 months for the semi finals as well as finals. The topic given to me was about “Dashrath Munjee – the mountain man”, which was something I was previously unaware about, thus by researching about it, I was able to expand my knowledge about great Indians and their stories.

In the finals, I was given an extempore topic on how it feels like to fail in class. I had previously never attempted extempore speeches and it was a challenge to come up with ideas in 15 minutes, but through the tips given to us, I was able to speak confidently and secure the second place. This helped me identify my strength of speaking, and I look forward to developing my skill of extempore speaking. In the competition, I also heard speeches from educators and radio jockeys who spoke about the importance of having good communication skills. They shared their stories of struggle and success and about issues of global importance like illiteracy, poverty, lack of proper education etc. These talks were very inspirational and gave me a lot of new information and made me aware about what we, as individual citizens, could do to have better personalities to make our country better. Overall, participating in young orators helped me identify my love and skill for speaking, made me attempt extempore speaking and also made me realize that I should broaden my imagination to come up with ideas instantly. I also learnt that planning in advance for a good speech gave me more time to include more ideas and portray them efficiently. The speeches given by the educator ( principals of 3 different schools ) and a few radio jockeys opened my mind to look at global problems like illiteracy and lack of education in a new way and inspired me to organize an educational fest. Oratory has always been something I’ve loved, and winning in a competition among a large number of participants was a very memorable experience! 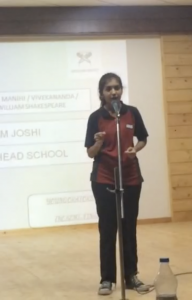 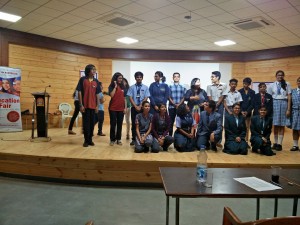 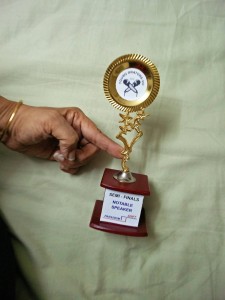