I hadn’t been on many treks before, so it was challenging to work my way up such an inclination, in the cold weather with the thin air. It wasn’t as tiring as I thought it would be though, so it broke my paradigms, but it was definitely physical exertion and challenging. I tried to take part in all the walks decided, even though we had been given the opportunity to sit back and relax because I thought it would be great to make the most out of the trip. I also made many new friends, and we had a great time together playing games. I think this was a new frontier for me given the kind of introvert I’ve always been. The trip helped me open up, and therefore it was an emotional achievement as well. We helped each other in our work during the trek, back in our rooms, and even while travelling. It was a great collaborative effort and we formed a friend circle that we would cherish for the rest of our lives! Apart from that, we also learned a lot – about how excessive apple farming had increased the temperature and therefore reduced the quality of apples grown, and about art and culture unique to the village by visiting the Roerich Art Gallery. It was awesome. We also learned to take special care of the nature as we were shocked by the amount of dirt and garbage littered around the sites. We learned that we should leave as small a footprint as possible to preserve such natural beauties for the future generations. This was an ethical concern that we had to take into consideration and also an issue of global significance. I enjoyed a lot and although I didn’t want to go at first and only agreed at repeated persuasions from teachers and friends, I think I would’ve regretted it if I hadn’t gone there. It was a great experience. 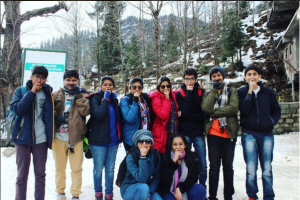