A Day with Orphan Kids 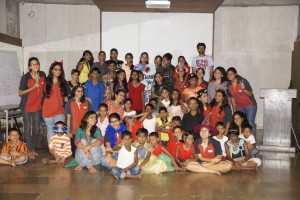 The aim of the activity was to spend some time with the orphan kids and entertain them and not make them feel that they have something less, so what we did was invite some of them to our school and did some activities with them like playing dumb charades or dodge ball, we danced, we made them paint and showed them movie and ended the day with treating them with good food.

I felt really great spending time with them, because they were so content of what they had irrespective of the fact that they have to live in an orphanage. They were always enthusiastic, what I earlier thought about orphan kids was that they might have really low self esteem but I was proved wrong, this again made me realise how incorrect my paradigms are. This activity was like a reality check, it made me feel that all I had was far more than what many people don’t have in their lives and I should be happy and content about it.

After spending the day with those kids I felt as if I’ve done something great and given them a new experience in their lives and added to their good memories, even though my responsibility was of a photographer for that day but I tried my best to conduct a few activities as well. Also, capturing their pretty smiles made everyone of us feel great because we were responsible for that.

In the beginning I felt a little out of my comfort zone because I wasn’t really open with them or danced with them, but soon I broke that barrier during the activity so that both the children and I could enjoy.

The most difficult part during this activity was that one of the children was really upset because of some reason and to make him smile was the most difficult task. He wouldn’t dance, sing, play or watch the movie but only cry. Ultimately, in the end all of us tried to cheer him and get him to express so that was on kind of an accomplishment.

I feel that this activity was just a one time thing, we just did it for a day and that’s the end. We never thought about the kids, even they would have wanted a commitment right? This is one thing I would wonder forever, and feel that we were a little unfair but we can definitely try spend more days with them. 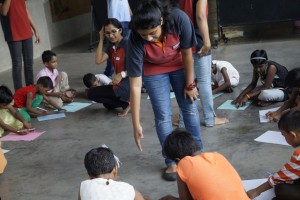