Art and Craft in one such thing that I love doing. I and one of my junior were in charge for Organizing Card Making Workshop in Creative Mela. Even though not everyone was excited about the Creative Mela because they had to give up their precious weekend but I was actually very excited as card making is something I love doing and I did not mind giving up my weekend for this.

As soon as I was given my activity that I had to organize (Card Making) I started planning about what was I going to teach those who will opt for my workshop. A lot of ideas started flooding my head at once. In this process, I tried something different that I hadn’t done with quilling before (hence trying to expand my knowledge about quilling and experimenting with it). I had planned a lot of things but then I was informed that we had very limited time so that actually reducing my enthusiasm (But then I convinced myself every little activity is worth your time and deserves the same excitement if you enjoy doing it).

I faced a challenge as well. Like all tasks were equally divided between me and my partner but unfortunately, she failed to teach and every one of them, I tried pushing her to do them but it didn’t quite work so at last out of frustration I informed the event coordinators about the same. They gave her a warning but even then I had to complete my work as well as hers. So I had to put double efforts and give more time ( taking away my studying time sometimes). But on the event day, i think we worked together well as we divided the kids into two groups and managed them pretty well ( Because even she realised it won’t work now if she didn’t work sincerely and helped me considerably well in pulling off this workshop)

There were several activities like card making organised in Creative Mela whose main purpose was to teach these students something new and hence help them develop a new skill but then there was this kid in my workshop and in my group who didn’t actually do anything by himself. Even Though I told everyone they had to do everything on their own but I did all of his work (because even after telling him or forcing him he didn’t do anything so I had to do it for him as he a so stubborn that he wanted to something different from everyone else so I think I was partial as  I did all of his work and at the same time did something different from what other kids were doing). This was an ethical issue that I came across.
But lastly what mattered was that I as well as students in workshop all enjoyed thoroughly and everyone learned something new and I also covered three aspects of my CAS that were Activity, Creativity and Service ( Because we had put our time and efforts for organizing this workshop for these students as well as helping them in developing a new skill without getting anything in return by volunteering for it) 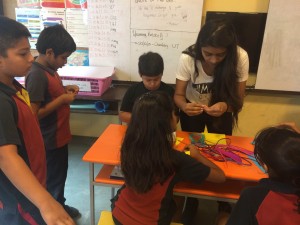 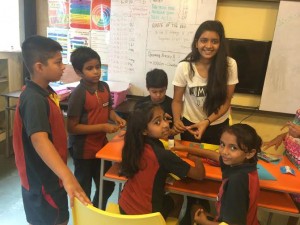