I participated in a Basketball tournament known as “Khel Mahakumbh” in men’s open category on the 2nd of February, 2016.

Inspite of I playing Basketball for a fairly long time now, this tournament stood out from the rest of the tournaments for a couple of reasons. One, for the first time, I was playing alongside my coach. This turned out to be an enlightening experience as our coach was superb on-court, actually putting into play the tactics he told us as a coach. The second reason was that we played in open category and therefore, had to face highly experienced players as our opponents.

I identified my strength as a good ball collector as well as having fair level of passing and co-ordination skills. I developed new areas for growth as we faced adult, well built, highly experienced and fierce players as opponents. Not loosing our self esteem just by their appearance and career was one good thing I did and hence, I developed how to not judge anyone/anything superficially.

Challenges were undertaken as we were firm on booking a spot for ourselves to Vadodra(host city of the state competition). We also tried zone defense as a defense tactic, which worked out amazingly well as we left the opponents in a state of helplessness and forced them to shoot from a distance.

There arises no question of our commitment and perseverance because of the following incident. After winning 18-6 to the defending city champions, we are left agonizing as they protested against our eligibility. Finally, they pointed out a mistake in the lots of the competition and the whole competition re-started. This tested our perseverance, and as a result, we again beat them 19-7 in the semi finals. This was a moment of pure rejoice.

Further, we benefited hugely as all the team members joined one another to help and achieve a common goal : Win, and play fair and square. This, to me, is an epitome of collaboration as we stood up to accomplish what we believed in.

We found ourselves pondering for a solution to the social issue of global significance : Manipulation by powerful individuals for their self-interests. The defending champions(Kosamba Team) had some highly experienced as well as influential players who tried to prove us ineligible but failed to do so, because of the transparency we maintained. Though they weren’t able to throw us out, they deliberately pointed out errors in the lots after they were knocked out of the competition as they lost to us.

As our motto was to “Win, and play fair and square”, we had already talked amongst ourselves how we had to exhibit our abilities staying under the boundaries of ethics. We cheered the opponents when they played well, and showed sportsman spirit by appreciating them post-match. On a personal level, I took out time to cut my nails and remove my watch before matches in order to be considerate about the opponents.

Overall, this was an enlightening experience for me as it took me to the next level of competitions. 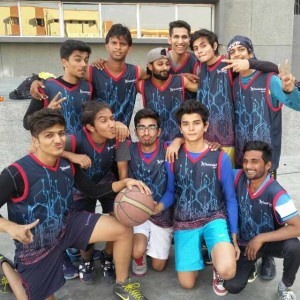 The squad- donning our new jerseys.