MUNs have always been my area of interest, I was really keen on attending the first session of Winspiration Model United Nations. It was scheduled on the 13th of August, but we had been allotted our countries and committees much prior. I was given the World women’s council with the country United States and the agenda was “Ways to combat gender inequality against women”. I was thankful for the change, this time, when I did my research I did it with more enthusiasm and interest. I was prepared but at the same time, I was also a little nervous because I had less number of days for my preparation. My research took more time than I had expected. I knew that my research was not going to be enough because the other delegates in my committee had more time than me. However, I was through with whatever preparation I had done.

Day one of the conference was the opening ceremony, we were introduced to the Chairs and Vice Chairs of our committees. After that we had a session about the rules of a MUN and how it works. Later, when I met the delegates from my committee; we were discussing how we wanted the committee sessions to function. I realised that all other delegates were quite experienced and smart. To be honest, I felt a little intimidated by them as it was my first major MUN. In the first actual committee session, I volunteered to give the GSL which is an introduction speech which talks about the progress of the allotted country and the steps to work towards the issue. I felt a little more confident after that.

I compromised with the other delegates and gave my inputs to form a resolution and came up with plausible solutions together. We discussed the causes of malnutrition which has become a global issue these days and provided feasible solutions about it. I also tried to take the committee in control and made it possible for everybody to make a point. I won the Best Delegate Award for my contributions in this MUN. 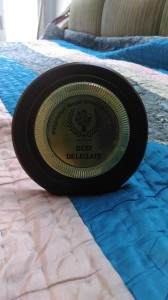