Reflection about Plantation trip to Vansda

It was a CAS trip planned by our school. We went to Vansda, a public garden that was being constructed by the government. Making huts, digging pits, planting sapplings and creating amazing views. We helped them in making garden.  After dividing in two groups, our group was to garden at one place and the second one at other. I was given a task to cut open the plants from the plastic bag and to create Ridges for plants (keeping water flow/consumption/irrigation in mind [all about science!]).

When I was cutting open the plants out of plastic bags, I had no clue as to how am I supposed to do it and as a result, I had damaged a few plants in the process; which ended up in scattered soiled plants, drain off a lot of energy and many people taunting me for my unexpected work. For improving my work, I had asked a few people to guide me and later on it helped me work better and faster, with the bonus of saved energy for later use.

My second task of working with others for forming ridges was an unexpectedly easy task. Usually, people fight for the task that seems comfortable to them and easy to do, hence results in small conflicts; but because all of us over here wanted to help and came with a purpose of providing good service, people were ready to take up difficult task and do more. This time, after the experience from my first work, I decided to understand how to do, what I am supposed to do. This action helped me in reducing my efforts and helps me do a smart work. I was able to work fast, leaving me time in between to take rest for few seconds.

As it was in monsoon season, I thought it would make our task easier; but the unexpected seasonal changes increased our workload. The task of bending down for doing your work and then staying/walking in the same position made it all better for an experience of hard core pain in the calve muscles. This experience of uncomforting only made me realized the tedious efforts of the laborers working in here for the same, for months!

After we completed our part of work everyone one was tired and was ready to run away. While working, everyone was sweating in the sun, there were times when everyone was thirsting for water and we had less of it available; that moment of fight and sharing the resources made me realized the importance of it as well as the hard work everyone was doing.  As we had distributed our work, we could work in more synchronization and effective results were seen.

After completing, we all were discussing our experiences with our friends from the other groups, and that enthusiasm with which we talked showed how happy/satisfied we were on our success of servicing. After the whole act of service, we all were appreciated in front of our mentors and pals; making us all feels proud of ourselves. You see, hard work always pays off! 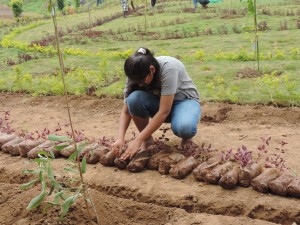