I was selected for an U-16 Inter-State Gujarat Football Tournament which was held in Olive Green International School Ahmedabad. I was feeling very enthusiastic and was looking forward for the tournament. As it was a long time since we played as a team in a tournament, we lacked coordination. I was self-assured that I would perform to my best ability, however, as football is a team game it is necessary for all the teammates to have practiced together instead of each being

We played our first match against Podar International School who were last year’s champions of this tournament.The pressure was at its peak because our match was the opening match and for the first time I got an opportunity to be the Vice Captain of the team. We(captain, coach and I)  had a difficulty deciding the lineup for the game. The difficulty was mainly because all of us had contradicting views  and consumed a lot of time, however after a long discussion we came up with the starting lineup. I learnt to accept differences and others point of view which i wouldn’t have learnt if i would not have participated in this championship.

We lost the match 3-0, however, I was satisfied with my performance throughout the game.  However I was quite happy with my and the whole team’s performance. We had several attempts at scoring goals but missed by mere inches.  Coordination and communication seemed to be the major reasons for us to lose this match. I think that I gave my 100% in the whole game, I was making many passes and was playing in the whole ground however I feel I was able to execute all the techniques that I had practised effectively before the match, nonetheless, I was able to identify mistakes and where to improve (long passes and heading in defence).  We lost our first match. However, even before the match had begun, we were aware of their strengths and knew they had a greater chance at winning, but still we didn’t show that and planned on showing the best that we had.

Through all this, I have experienced playing against a strong team, accepting failure and managing a team. Managing a team isn’t easy when you are also a part of that same team, many issues rise up as this was my first time. This tournament gave me an insight into how you can manage and collaborate equally with teammates.  Also a new thing that i leant was working collaboratively with my team mates. 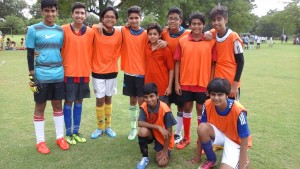 Team Photograph before the match