I and the other french students had planned a french cooking fest, in which we had to cook french food. This activity proved to be a tad bit (aka a lot) challenging as managing so many students in the school kitchen, where half of them don’t know how to cook or where the utensils and ingredients were kept.

During the planning, we first thought to only keep this activity between us french students, however I felt with such few students (we were only six french students), this activity will not be fun and we will not get many dishes to explore. Then we decided to invite the hindi students as well. So, each person took four to five hindi students to help us. I personally feel that I am lacking certain leadership qualities, including managing people and allocating work. This made me nervous and apprehensive as I thought thought I would screw up this activity for myself and others, but I undertook this challenge as an opportunity to improve my leaderships skills. Cooking wasn’t my expertise either. They have gotten me into some deep trouble, thus I participated a lot in this activity so I could cook something good for that day and to improve them for the days to come. On the day of the activity, we were told that the students without pants would not be allowed to participate in this activity.

After hearing this announcement, I was horribly shaken as my whole team (excluding me of course) was wearing shorts. I was feeling terrified, because I felt that I would fail without my team. I also felt that if I would mess things up, the school might not do this activity again.. I knew I was dramatization, but at that time I was seriously panicked. However, I decided to accept this challenge with a smile. Ignoring the difficulties I will have to face in future, I teamed up with Khushi Shah at the last moment and started to cook my chosen dish, which was ‘Apricot French Toast’. During the activity, I realized that I had forgotten to order the primary ingredient – milk. I was hyperventilating inside, but I pretended to be calm while scanning the kitchen for some milk. I searched up and down, left and right, high and low,  when I finally found a pack of soy milk. I didn’t actually know how to use it, but I did anyways. The amount of commitment and perseverance I need in this activity was very high, because there were many on the point changes which was considerably very shocking and difficult.

In course of the activity, I did keep in mind the ethical considerations and the school policies while making my dish as instead of using eggs, which is against the school policies, I used unsweetened or unsalted butter. I didn’t spoil other people dishe or cheated while making mine, hence being ethical. After a lot of hard work, my dish was ready and everybody loved it. Currently, I believe that my cooking skills have developed, however my leadership qualities couldn’t be put on show as I had to work in a pair in the end. 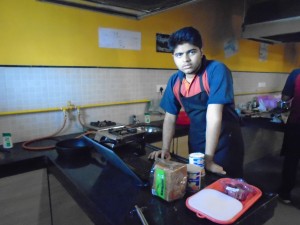 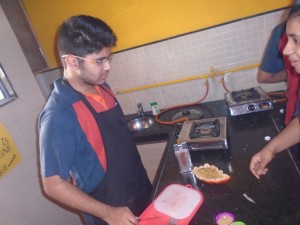