Ride with Pride against breast cancer 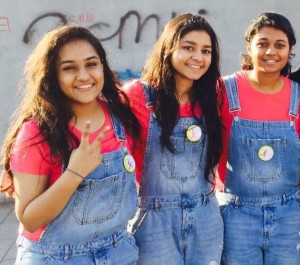 Ride with Pride against breast cancer was a cycling event organised to fight against breast cancer which has been consuming many lives. We organised this event as our CAS project and we specifically chose cycling because it’s one thing that we really enjoy. We planned to conduct the event at a very small scale but we never got to know when did it become so big, we had approximately 300 people who supported our cause and joined us early in the morning with their cycles. Right now the event feels like success and everything ended in joy, but the behind the scenes of the event weren’t this pleasant. We faced tonnes of problems since day one but we took them as a challenge and solved them. 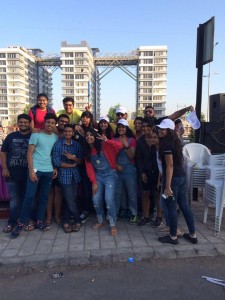 This entire event was a learning process, we failed and then strived to succeed, it was great and memorable. During this event we fulfilled all the learning outcomes for CAS:

Learning Outcome 1, I have always helped in organising events by being a part of the organising committee and just playing a small role and I’d never thought of organising such a big event, while doing the event I realised that it wasn’t really hard to communicate with people and I could really well explain them what we were doing and what we wanted from them, that was probably my strength and I did that quite well. In the last 2 days of the event we got our vent advertised by sending SMS and due to that I had to receive calls at all different times and I handled it quite well.

Learning Outcome 2, challenges were a part of the event all the time, they were either small or really big but they were always there, for instance, we just couldn’t name our event, we thought for maybe 3 days just about what would we call the event – this was a small challenge but soon we realised this is just the beginning. Soon, we had to go to different companies in the city to get sponsorship, that was the next challenge, to convince people so that they give us funds to run our event. We also needed permission from the government regarding this event which was tiring, we had to go to the commissioner’s office thrice just to get the permission letter signed and later going to different police stations explaining them what the entire event is all about. These were challenges that we knew we were about to face but the biggest that I faced was the fact that I could not balance school and the event, we had to skip school or leave early from school to get our work done, that did create an imbalance but we coped up.

The third learning outcome is anyway fulfilled as we pulled up this entire thing on our own and achieved what we wanted to.

Learning Outcome 4, this was probably the hardest – to commit to the activity once started and facing challenges that were least expected really drove me crazy, for 15 days I did not stay in home till 9-10 in the night just because I was busy with the event, and I was missing out on my revision, due to which I felt that I should give up on this. But, we all managed to keep it going and make it a huge success.

The 5th learning outcome was the most important one because it was the three of us who organised the event and definitely because we are different individuals and we think different there had to be differences of ideas, we faced a few conflicts but we finally thought that if we want our event to be conducted successfully we have to cooperate and compromise by considering everyone’s views.

Our event centered around the awareness of breast cancer which is a global issue faced by millions of women, we also will be donating our profits to cancer patients who cannot afford the treatment, this way we will be catering to the 6th learning outcome, also we need to be tight on our ethics by using the money in a good cause and not just use them for our own good, because we considered the ethics we also fulfilled the last learning outcome. We gave all the participants a paper which gave them information about breast cancer and how can they prevent it, this is how we could help people who were completely clueless or not well aware about the causes and treatment of breast cancer as well. 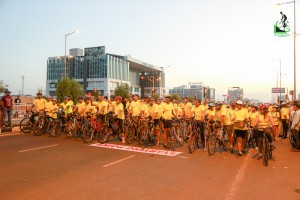 The cyclists are ready for the flag off 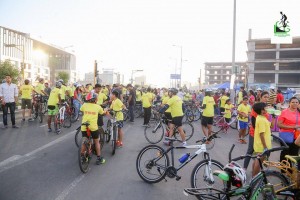 After the cycle rally