HMUN India – “It’s not a resolution, it’s a revolution.”

Suits, ties, skirts, shirts, that’s exactly how an MUN looks like. Only, HMUN wasn’t a group of 200-300 people, it was a whole lot 2000 people! HMUN or the Harvard Model United Nations was held in the city of Hyderabad from the 12th of August up till the 16th of August, 2015. I was participating as a delegate of South Sudan in SOCHUM for the agenda “Rights for the protection of journalists globally.” The difficulties began all the way from the month of April. After receiving our agendas, we had to thoroughly work and do in depth research for the topic for about four long months. There were times when it got really frustrating because there was so much to do and so much to understand, however I knew I could not give up because presenting conceptually correct ideas in the committee was imperative. Then eventually came the day of the mega conference. Stepping out of the comfort zones of our city and being exposed to a completely new environment filled with strangers made me apprehensive in the start, but that was not all. The discomforts and challenges only grew with passing time. I was frustrated when I was hardly allowed to speak for about five minutes over the course of four days. Our committee consisted of 250 people, each very talented and here to win. There were 5 established groups working on different resolutions, 3 major and 2 small ones. I was the leader of one of the small groups which consisted of me and 11 more people. At one point, I had understood that if I wanted to win, I had to abandon my group and merge with a bigger group that was ready to give me a higher position, but I decided to do it differently, and I took it up as a challenge to not strive to win but unite ideas and people, and make a whole lot of friends. This was not me because I always believed in winning, little did I know that winning was not only about the prize or the position but about winning people’s hearts and friends. The HMUN gave me an invaluable experience in dealing with global issues, made me realize my responsibility as a global citizen and made me understand the true value and meaning of a win. 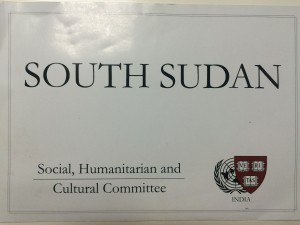 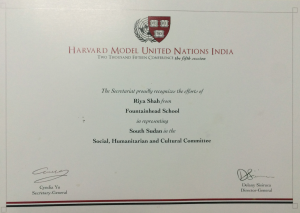