Naggar had some of the finest moments of my school life. Winter trip which was one of the most popular topics to talk before December. We debated a lot on the winter trip and finally ended up choosing Naggar. There were just a few people who registered for the winter trip and even fewer paid for it. After that many people decided to go there and 85% of the grade was in the trip. The trip was really awesome as it was the first time I was going with my new friends. We all had to travel for two days, which was exhausting, but we enjoyed by playing different games in the bus and train. I lost my shoes in the train, and it was snowing in Naggar. I was really tensed about the trip as I didn’t have extra pair shoes, the only thing I had were my flip-flops. We reached Naggar and had our dinner, saw our rooms. We all gathered  in a room to watch a TV show known as “Bigg Boss”, which was one of the most liked show in the entire grade. I came to know many weaknesses and strengths about myself that I was good at trekking and walking, but I was very careless, I lost many things during the trip including the expensive stuff like iPod. It was really difficult to trek without shoes but I somehow managed to borrow crocs which helped me a little. The most surprising thing was a television in each room. We were in a village and we had televisions in each room which was quite surprising. We did skiing too, it was fun and did two treks a day.

My strengths and weakness were identified by me and others when we went for our first trek, I was the last to student to start as I woke up very late, which was one of my weaknesses. I started trekking and slowly and gradually I was getting bored, so I started walking really fast and reached to the person who was the first one to start and was almost 1 kilometre further from the others, and then I found out that I was not so tired, it was just normal. I continued walking with him and discovered that I am a very good trekker. Also I lost many things during the trip, which shows that I am a careless person, yes I am. I feel so good that I have strengths that I didn’t even knew, and I keep in improving my weaknesses. We supported each other while trekking and helped the people if they need any. We had different competitions or games in which we used team work to win. The most important thing I learnt was clothing I always used to learn clothing sense from my friends and used to take inspiration for my next outfit. We used many tactics to avoid the cold weather, from which some of them really work very nicely, that were also the skills I learnt. This journey had the longest travelling for almost all the students and teachers, but we still went for the trip and we enjoyed the entire trip instead of hating it.

We all had a lot of fun. I came to know the people in my class and how they behave. Had an awesome experience and the new celebrated with classmates is always good. 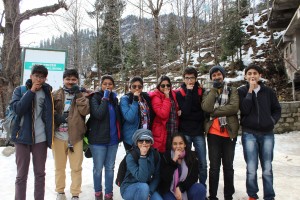 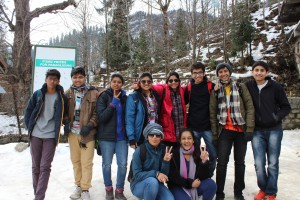