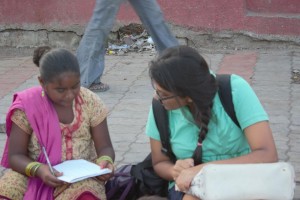 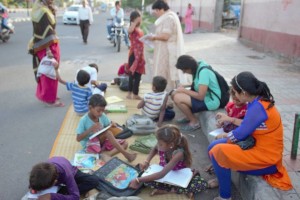 Helping others has always been one of the things which I could do with a lot of determination. When I got to know about this NGO called “DISHA” which has taken an initiative to teach the underprivileged kids, I made my mind to volunteer for 2 months. There was no such school type thing it was just the footpath and us. We used to put a mat on the footpath and teach. I was able to provide my students the knowledge they needed to exhibit their talents.

The day when I got there I could see the spark in those little kids’ eyes. They were so enthusiastic to learn that it encouraged me to do my work with determination and be committed towards it. I was told to teach Hindi, English,Math and drawing. I thought that the activity really taught me many things and those kids too. I got an experience of a thing which I had never done before. While the journey of teaching I developed a bond with those children and Hence, I feel that this activity meant a lot to me. I learned how to tackle different situations such as if the student did not want to study I had to bring up some spontaneous activity. However, there were many problem which I faced during my teaching journey such as: language problem, the language in which they conversed was Gujarati and I had no experience of learning that language. Eventually I heard other teachers speaking in Gujarati and learned the language in bits and pieces, I was glad. There were many people who donated things which the children would need. Some also celebrated events with them and some took them to movies. I enjoyed a lot in this CAS activity though it was a bit tiring as my schedule became very hectic. I had to come from school and rush to this school but in the end it was worth an experience.

I identified my strengths which were creativity and the urge to help those in need which led me to work with these children and develop the areas which still needed growth such as communication skills, persuasive skills, patience etc. I realised that I was not alone there I had to collaborate with other teachers as well who were more qualified and experienced than me but working together helped me gain confidence and motivated me to be like them. I always wanted to work on an issue which was and is impacting not only a single area but the whole world however, I had to first start small. By doing this I realised that it is not that easy for a layman to provide a service like this. It needs a whole lot of determination and commitment towards the job. And I was very determined while doing this activity as I used to be exhausted however, I never took a leave unless there was an important reason.

Overall I was satisfied with how I worked for those 2 month. I was able to use my knowledge and help others which was the main objective of this activity.