“Success is not the key to happiness. Happiness is the key to success. If you love what you are doing, you will be successful.”   -Herman Cain

RWP’16 also known as, Ride with pride 2016 against breast cancer was one of my biggest and greatest life achievement in 2016. 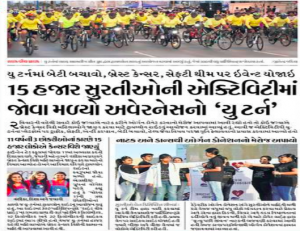 (After our event, the very next day on 7th March 2016, we got featured in a Gujarati newspaper)

This event was organized by two of my friends and me. Cycling is our passion and hobby, so we decided to do something related to it.  The event was truly a new experience for all three of us. Our motive was to create awareness for breast cancer and healthy life. Plus, through this event we planned to donate all our earning to cancer hospitals that do operations for free of cost. The event enlightened 1500 Surtis plus 300 cyclists where both men and women came together with their bicycles and ride them to glory promoting a world devoid of these threats. It was really fun organizing such a huge event for our entire city, but we had faced a lot of challenges that forced us to be more dedicated towards our goal. 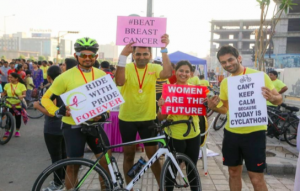 Once we started with the event planning, we encountered challenges and few circumstances where we didn’t know how and what to do. Managing time was the biggest problem. We couldn’t manage studies plus the event work simultaneously.  Due to our event scheduled on 6th march, we had really less time to prepare for our final exams and we missed a lot of curriculum, which became really difficult to cover the portion. Not just this, but because of working for the entire day and going from one place to another we couldn’t have our breaks on time that affected our health and the daily routine. Through this I learnt a lesson for my future that never give up on health, it should always be our first priority plus put first things first.

Secondly, deciding upon the route was a difficulty. As, it was a Sunday there is an U-TURN event already going on in the city and most of the Surtis usually go there on a Sunday morning. We got really tensed because most of the people go there so there were really less chances for us to get participants plus it was almost impossible to get the NOC (No objection certificate) to block the roads. So, we approached the U-TURN head and asked him if he can help us. After negotiating with him, we made U-TURN our event partner. Through U-TURN we could also go on Sundays and promote about our event. Additionally, as U-TURN is a government initiative and now that it was our event partner, we directly went to the commissioner’s office to get an approval for the event. And thankfully he agreed with our plan, as he was really happy for us that we three young girls are doing such a huge rally for an awareness program, which is outstanding.

(On a Sunday morning at U-TURN for promoting our event)

Thirdly, after getting the plan approved we couldn’t begin with our event preparation, as we didn’t have the startup money. Thus, we then decided to go and seek for sponsors. Getting sponsors was the most difficult and tiring task.  So, we made a PowerPoint presentation to persuade the sponsors to provide a helpful hand by supporting the cause. We listed all the benefits that the sponsors will get through our event. Although, one problem that we had faced was while we asked for sponsors we had told them that we will advertise about your business everywhere including few hoardings in the city, roadside banners, newspapers, radio etc. But, when we went to hoarding company for getting hoarding of our event in the city, we didn’t have substantial amount, as the rates were really high-pitched. So we decided not to put hoardings. This was unethical, as we had already told our sponsors that we would at least put 5-6 of them in the city. At the end while cutting off this idea, we got a contact through one of our event partners who didn’t charge us for the hoarding so we decided to put one hoarding, to fulfill our promise. 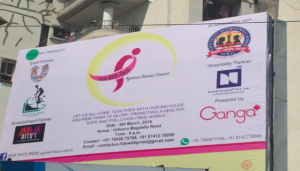 (Hoarding designed by us)

The fourth challenge that we faced was we didn’t get the expected number (500) of participants till one week before of the event. So all of us got really scared and worried. We had lost hopes of our event getting successful. We regretted for all the hard work we had put in to make our event as effective as it can be. Later, we decided to not give up and instead we motivated ourselves by listening to what our parents and friends said about the hard work we had put in.  We had the same energy and determination again like we had on the first day of our event planning. Then we brainstormed about what we can still do to get at least 250 participants. We thought of all the effective advertising techniques that were possible by looking at our budget. Because till this time, we didn’t even reach the break-even point of the budget as we already did a lot of spending on all the tee shirts, medals, Gatorade and water by buying it in quantity of 500. Hence, we planned to advertise through schools, radio, social media, newspapers, pamphlets and we sent a SMS to all the Surtis. 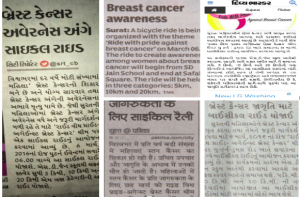 (Types of newspaper where we advertised)

Last but not the least, I also faced few problems when it came to collaboration of work. At times it so happened that there was miscommunication between the three of us and I was not updated of what my two partners had thought of. So, we decided to divide the work and allot tasks to each other. This led us to do more efficient work with less time and no miscommunication problems. What I leant was working in a group becomes difficult at times as everything doesn’t take place the way we want it to. But, at the end three of us were really happy because we could reach our aim.

Additionally, there was one ethical consideration that i could think of after the event. We were making people aware by giving them a leaflet about what breast cancer is but at the same time we were even wasting a lot of paper. So, what i personally learnt is, if we are in a world full of technology then we should make use of it effectively. Thus, we can also save paper and aware them through various techniques through technology usage. 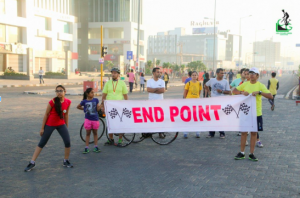 The event was a huge success. I can’t describe how happy I was. My happiness was beyond imagination because my parents, friends and everyone else were so proud of us as we reached our aim, while we donated a huge amount of money too few cancer hospitals, which was of help too few women. Through this event I thoroughly enjoyed my CAS experience as I could achieve all the three strands creativity (by designing the logo, pamphlets, hoardings, banners etc.), service and activity, which will help me in my future. 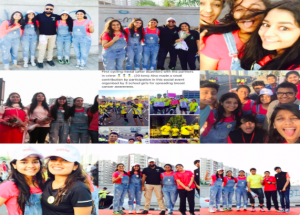