Every Year Hindi Divas is celebrated in our school, with a lot of enthusiasm . This event is celebrated throughout all the grades. It used to be a one week celebration and consisted of various activities. We were exposed to hindi by all the possible fun activities. However, this year the celebration was quite different. It was in a form of a friendly game session between grade 12 and 11 for about one and a half hour.  Some students from grade 11 had planned all the activities/games for the session and two of the students were the main coordinator. Aarsh and I had to plan one of the activity named “Yeh kaunsa Dialogue hai”. The game had three rounds and in two of the rounds, the participants had to guess the dialogues and in the third one they had to act the given dialogue. Three teachers were chosen as the judges for this game. Planning the game was easy, however optimal usage of hindi was an issue. Therefore, planning the game was not a tough job, but making sure that we include everything in hindi was a problem. As, a result I shortlisted many hindi dialogues and consulted my teachers and then finalized the dialogues.

I have never planned an activity for a class or took over any leadership authorities. Planning the activity was one thing, but executing was my bigger challenge. I already have stage fear and facing four grade together and making sure that I handle the game properly was my concern. However, another challenge for me was to make the game as enjoyable as possible. It as strictly instructed by the teachers that everything needs to be in hindi, therefore while shortlisting the dialogues I had to cancel a lot of my options. Still, I managed to plan a fun game with the maximum usage of hindi. Integrating bollywood was the best possible way to make this game fun and also inculcate the language. I thought that I might not be able to handle the two teams (grade 11 and 12), but it was not that hard. I went up on the stage and very calmly  started the activity. I learned that if I decided to do something then I can even face my fears. This was a very small scale activity, but it did build my confidence.

Working together is always beneficial. It gives scope for improvements, better ideas , more perspectives and a stronger planning. Aarsh and I were working together. This helped us finalizing things quickly, it saved our time and we could share both our opinions and then later conclude which one would work the best. I could not have handled everything on my own, therefore having somebody to help was very supportive. Working together limits the mistakes and the things that could have been forgotten. When I forgot something, Aarsh would cover up and when he did , I did the same. Working together gave rise to more ideas, and as a result we did plan a very interesting topic.

I took the responsibility to plan the activity, so I had to be committed towards it and not take anything for granted. I had to make sure that  I communicate with the coordinators of the event and my hindi teachers to know about their expectations regarding this assembly. While giving ideas, I made sure I did not suppress anyone’s perspective and also listened to different point of view. As Aarsh and I were working together, I also had to respect his opinion and work with tranquility. I  made sure that no dialogue is offense and the way we addressed each question is not not hurtful to any of the participant’s. Also , we were fair with both the teams, as the chit system decided which team would go first. However, during the game was going on I did say something hurtful to Aarsh and later when I realised my mistake I apologized to him in front of the class. 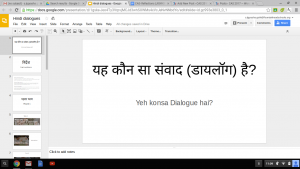