Never in my life had I organized an event, nor did I ever imagine that I could. Garba Fest is an event that I am absolutely proud of; not only because of its success but because of the thrill that it gave people as well as the help it did to the society. I am a person who believes that it is my duty to help the people who have been born in unfortunate conditions because I think that it is not their fault but their rotten luck as opposed to mine, which is comparatively good. Therefore I along with my partner came up with the idea of a fund raiser. However for a fundraiser we had to think of various things that we could offer to the public in order to raise money. I am glad to have chosen business and management as one of my subjects because it helped me a lot in evaluating ideas from the business point of view. After brainstorming over a lot of ideas we came up with the idea of a Garba event as we thought that it was something that would attract our audience the most. This is where we took into consideration the saying that Gujarati people can do Garba anywhere and everywhere.

This plan just started as an idea of a fundraising event, but as we advanced with the plan the motive was not only fund raising but also give the students of fountainhead school an opportunity to celebrate a much loved event along with all their friends and teachers. Planning for this event was by far the most tedious job I had ever done and it was hard not to scream when anything went wrong. The first thing that we had to do was decide exactly what we wanted to provide in the fest and make departments accordingly, and thanks to the knowledge I gained in BM classes we were able to do so. After this, came one of the most important step which was to choose the departmental heads. This was really hard as we had to choose people whom we could rely on so as to not mess up our event. Also it was hard to keep our biases aside and to not give our friends priority, so we went along with the method of interviews, keeping the much stressed upon “ethical concerns” in mind. Initially we did not have a really detailed plan when we appointed departmental heads; however when we started having meetings (which were really chaotic) and started taking into consideration other’s ideas and opinions we eventually came up with quite a well detailed plan. 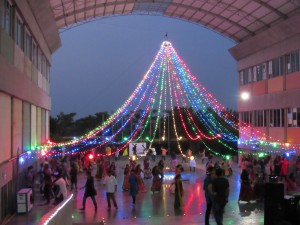 During the ‘rigorous’ planning stage of 1.5 months I discovered that I was horrible at communication and negotiation skills but thankfully the so called Garba fest team had people to cover these flaws. That was when I understood that having all skills is not necessary but knowing the right people who have them is. Hilarious but true. I was immensely relieved for the planning stage to be over because by then I was absolutely ready for some action or the so called ‘execution stage’. Little did I know that the real chaos was about to hit us. I am surprised as to how is it that I managed not to end up in a mental hospital during that stage. We had to run all over our ridiculously big school to get the smallest of things done, like confirming the amount of resources that the school was going to give us. We did so much of running that I was almost certain that we could include the activity component of CAS on the basis of that. Almost! There were a lot of problems of communication among the departments, and the only words that consoled us were “its ok. This is your first time”. However we managed to pull through. To say that we were ready for the D-day was an understatement. 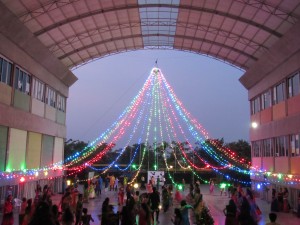 As I entered school that day, just the sight of the lightening made my eyes well up with happy tears. I felt such joy in that moment; I felt sense of accomplishment. But it was just that moment because after that all hell broke loose. The word chaos wouldn’t do justice to the situation of that time. We also had to prep everyone up for the surprise performance by ASTH. I thought that it would be a good idea to have a performance done on women empowerment because it fit perfectly with the theme of Garba as we worship a goddess on that day instead of a god.  Finally we had everything set up, and there were so many people who had bought the tickets right after seeing the decorations. 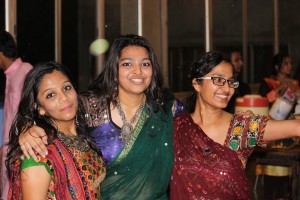 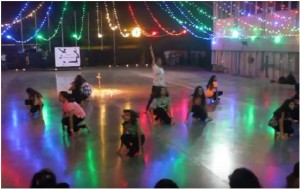 When the fest began there were always little things that needed attention. However the encouragement from the crowd kept me going. Neither could I have been more satisfied of the fest when it ended nor could I have been more disheartened of the fact that it did. Overall it was one of the most enthralling experiences that I have ever had, and the profits were just a bonus.