Women empowerment is a recent uprising agenda which is grabbing attention deservingly. A youth run was organised by DAIICT Gandhinagar on republic day, to raise awareness about this agenda.

I had participated in the 7km run organised.

I am not a very sporty person but I am a feminist, so on a little persuasion by my mother and motivated by the women empowerment agenda, I decided to take up this challenge. Before the marathon, I was sure that I wouldn’t be able to complete this run and was sure that I would be the last one to complete. But, on reaching there, I realised that there were people from all age groups participating. From 5 year old kiddies to old aged grandma’s which gave me solace that maybe I wasn’t alone in trying a new thing.

This was a very new experience as I was preparing for the marathon, I had to regularly go for runs or practice on the treadmill, I had to push myself to practice and take care of my fitness so I was comparatively ready for the day. For this, I had to also be motivated by my mother, I developed a good habit of running which I managed to maintain even after the event ( even though the regularity has decreased ) Overall, it was a huge challenge to push my limits of what I was capable of physically.

The ceremony began with a very interesting and knowledge – enhancing speech by the mayor of Gandhinagar, who is herself a successful professional woman.

Even though it was tough, I completed the 7km run, and I felt very proud of myself.

Further on, there were street plays by the college students and art work which increased my knowledge about what problems exist in this world, and what steps we could take.

It would have been easy to quit in the middle of the run, or take a short cut, but I chose not to compromise my ethics and ended up learning a new skill of trying new things.

I felt proud that I took up a challenge and was able to complete it and have already registered for another marathon next month.

The entire event not only helped me personally, but also broadened by understanding of the agenda of women empowerment through speeches and street plays. 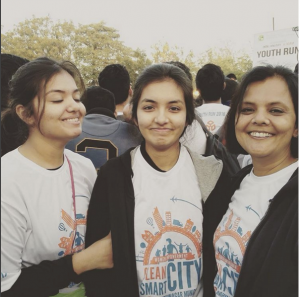