Books are a man’s best friend. Ever since I was little, I’ve been an avid reader and imagining a world without books is next to impossible. On a recent visit to a government school, I was shocked to find that a school where hundreds of underprivileged kids studied had a shortage of books.

I was highly motivated to do something about this, so I decided to get involved in  a book drive…but then I thought, why not do something close to home? I decided to organise my own book drive in my neighborhood. At first, I was really scared and lost as I didn’t know the process of how to collect books or where to donate the books I got. I asked a few people about book drives and prepared myself for this new challenge. I and a few of my friends planned carefully about how to approach people, which kind of books would be beneficial to the kids, which houses to visit, how to organize the books etc.

The next step was to find an NGO which would take our books, through some contact we found an NGO called “Yuva Unstoppable” who were ready to take our donations.

We decided to make posters and talk to people to spread awareness about how there is a very dire lack of resources for kids in our city.We made colorful, eye catching, bright posters with slogans about books and the necessity of reading in everyone’s life, including the ones less privileged. While researching and preparing for what to say, I was able to increase my awareness about resources, NGOs, the kind of resources needed according to the target population etc.

When we did go around to people’s houses, I found that people weren’t as open-minded as I thought they would be, it took a lot of convincing for people to even give us books they weren’t using, they would rather give it to the ‘pastiwala’. This was a little disappointing for us, and also increased our work load as we had to go to a lot more houses than we had planned as we did not get enough books at first. I realized that maybe I had to work on my convincing and public speaking skills, and I also realized that I should have a backup plans. However, as we had a group of people working together, we eventually managed to collect some books.

We continued this task for a month, this was a little difficult as all of us had time scarcities due to daily work and studies. But, we were committed to making this book drive happen as we had given our word, so with utmost perseverance we collected books whenever we had little time here and then.

Our next task was to segregate all the books according to genres, languages etc. We had to plan very carefully about this, and we, as group members had a lot of conflicts about this but finally we segregated it and sorted it out.

We finally donated all these books to an organization called “yuva unstoppable” and it was an amazing experience to contribute a little to make their lives more knowledgeable and interesting.

This activity made me realize a very important skill which I needed to develop – my communication skills within a team. I was not able to correctly portray what I expected from my friends and thus there were problems in our planning which led to last minute hassles. Further on, when there were conflicts about making any decisions like how to approach people, making posters or other forms of advertising etc, I was not able to make quick decisions. I observed that this area is something I needed to work on.

One of the ethical considerations I had to keep in mind was that, since I had committed to this cause, I could not fall back as I had given my word to the NGO, I also had to make sure that the books were of decent quality as they were to be given to other people to use and could not just be of bad quality.

Also, as a leader of a team, it was important that I stay rational and calm, and make smart decisions while respecting my teammates and their ideas.

Despite shortcomings and hurdles in our plan, I genuinely felt good doing this activity. I had lots of fun making posters, and felt proud when we collected a large number of books. Though it was a very small scale activity, I learnt important lessons on team work and Books impart knowledge in a way media never can, it improves language, stretches our imagination and implants new ideas in young minds. It is a necessity and the lack of available resources for underprivileged is a global problem and this small scale activity made me realize what a great problem this is and that we should all take steps to bring solutions to it. 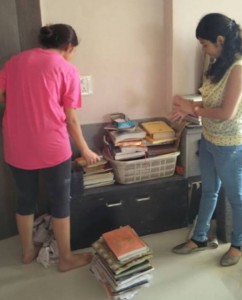