I was really excited when I heard that I got selected in schools football team again. I always wanted to win this particular tournament because if we win the tournament then the whole team can go further for state level subroto competition.

I was quite nervous at the beginning of the competition. I just recovered from my leg injury so I wasn’t in my best shape but I was fit enough to play the game. However, we succeeded in winning the first match which wasn’t very tough team.

I was able to make few passes in the first game which lead to goal. I was able to keep the ball in our possession most of the time and I was even able to tackle the ball.
I was able pass with accuracy most of the time. I felt I wasn’t tough enough to continue my form in the game. For football, even stamina is very important so that I can keep running and supporting your teammates. I felt I lack endurance.
The challenge I faced was controlling the ball. I wasn’t able to control high and fast ball in the game so what I did is I just gave ball a direction and didn’t stop the ball at all. I simply pass the ball without stop the ball. I succeeded almost all the time.
I played as a midfielder. The responsibility of a midfielder is to keep the ball in possessing and support both forward and defence. As a team we weren’t in regular practice so lack of coordination in our team lead us to defeat in the second game against the home team.
I wanted to play a good game, by good I mean fair, and win the tournament. I played clean game. I would have played physically rough with opponent players who were playing unfair game but I remained calmed and didn’t react in a way which could have injured opponents. There was no foul called on me by referee.
What I learned from our game is that most important thing in any team game is passing skills which keeping the ball in possession of our team. 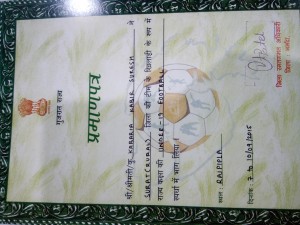 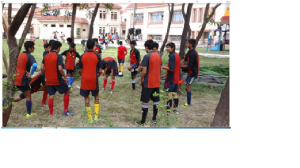 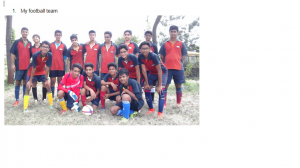