What activity can give one more pleasure than planting trees and helping to keep the nature clean in this thrilling beauty of the monsoon season? The “Tree Plantation Drive” was a fun, informative and satisfying activity for me. In this activity we had to plant trees in K.V Central School, Surat with our friends and teachers. The main reason I wanted to participate in this activity was that, I wanted to do something for the nature like cleaning the environment, planting trees, or showing awareness to the community about the present condition of nature. I thought that this activity could be the first step for me to achieve my goal/ambition.

Now, that I’ve performed this activity, I think that I have successfully been able to grow in a new skill, which is ‘environmental care’. Well, I have always hated to be surrounded by especially ‘mud’ – it used to make me feel gross, nauseous and it was really irritating for me. The jest in this  activity was that, that the entire activity was primary focused on mud; such as digging hole in the mud, placing the plant in the mud and then cover the plant roots with mud, like everything we did was somehow related to mud. This made me extremely regret my idea to participate for this activity because it was becoming very hard for me to take part with the others, initially. However, when I saw my friends performing the activity with such enthusiasm, I tried real hard to persuade myself into taking an initiative, and in no time I was enjoying the activity with my friends.

The biggest challenge that I faced was when I decided to plant a really big tree. Well I don’t know what got into me, and I suddenly decided to pick the biggest tree in the lot, and plant it almost half the way around the school. The only support I had in this ‘stupidity’ was that I wasn’t alone. I had two of my friends, Vinit and Shasvat and some of the strangers we met there to help me. We started with picking up the plant and transporting it to the back of the school, which wasn’t very far, but with the plant in the hand it seemed we would take ages to reach there, it was that heavy! So Vinit and I, somehow reached there with the plant, and ‘then’ we found out that there was only one big pit empty, and unsurprisingly that pit was completely flooded. Well we obviously weren’t professional planters and consequently we were not at all in a good mood, so we just cut the plastic cover around the plant and tried to fit it in the pit, but just when we thought our work was done, BOOM! – the plant just fell off the pit to the ground, like it wasnt being able to stand still, because it had no support to the ground. In this situation we had two choices a) Just the leave the plant there and go back home or b) Struggle really hard to remove the water from the pit and plant the tree again. Well, we were completely satisfied in choosing option ‘a’ but our ethics came in way so onwards we went with option ‘b’. We tried to remove the water from the pit chance by chance and by then we had Shasvat joining us too. We might have taken approximately 10 mins to TRY to remove the water, but whatever tactic we used, the pit was really very big and it would take us ages to remove the water. Thus we decided another stupid idea, to dig a pit of that size by ourselves; and hence Shasvat and I got to work. It was very hard and challenging for us to dig a pit of that size and to make matters worse, it was raining quite heavily, and as every second passed, we thought again and again to quit, but we were extremely dedicated to our task, and so, after some time we were able to complete digging the pit. Then it was the easy part in which we had to just place the plant the attach it to a stick, but digging up that pit was a real challenge for us and only because we worked collaboratively were we able to complete the task by ourselves.

Well, during this activity the biggest ethical considerations in our mind were that we weren’t supposed to dirty the surrounding, by throwing plastic (which were used in covering the plants) around or just leaving any tree unplanted, and I think I have tried my very best to achieve the ethical considerations. In short, this activity was amazing and I had a lot of fun in being around nature. I was also able to remove my perception that mud is gross; which I’m completely confident about as I was covered in mud the whole time and I was actually having fun.

Taking everything into consideration, I believe that I’ve completed my goal/ambition of helping nature. I hope that I will soon be given chances now and then to complete further steps of this fantasy. 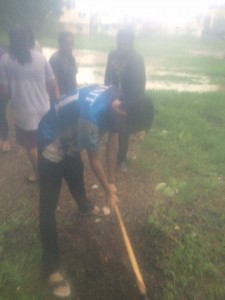 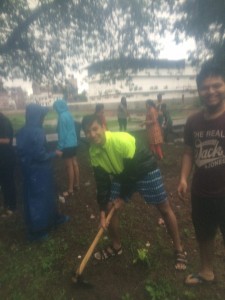 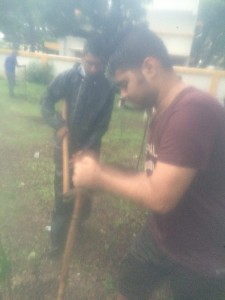