Sunday mornings usually are very lazy for me, I wake up late and take a lot of rest however this Sunday was different. Me and my friends decided to go for tree plantation, we kept our laziness aside and wanted to work for conserving nature and showed dedication for this activity by reaching for the plantation on time. With advancing time nature is constantly depleting and all my friends thought we need to do something about it. And then came this beautiful opportunity to serve nature. What best activity we can possibly perform to preserve nature? Planting trees! The tree plantation activity was the initiation of Nature Club a prominent environmental organization.

After completing the activity I can say I have successfully developed a new skill which is “Environmental care”. Initially I was not comfortable being around mud because it made me feel disgust and I felt dirty. As the whole activity of tree plantation revolves around mud, I started regretting my decision of coming for this activity however as I thought about the greater good that I will be able to plat trees so I decided to work in the mud and I actually felt really great about it. I started liking the idea of working in mud.

The biggest problem I faced was when I decided to plant bamboos. Bamboos needs to injected into the soil deep. For doing that I needed to hit the bamboo with big rocks and push the bamboo deep in the soil. However after each push injecting the bamboo deeper in the soil became hard. Also I cut my hands while hitting the bamboo with rock. However after multiple attempts I thought the task became easy and I almost felt that I had mastered a new skill.  After sometimes I felt tires so I decided to take help from one of the member of nature club and some of my friends. With our combined efforts we successfully planted around 15 bamboos.

During this activity the member of nature club taught us about plantation of plants in detail. Also I see how this activity has a global consideration as I am working for nature which is facing threat globally. With all my small steps I am trying to make an impact in preserving nature. As we know the saying “Many water drops collectively make an ocean!” 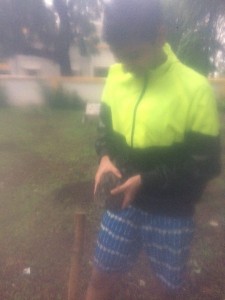 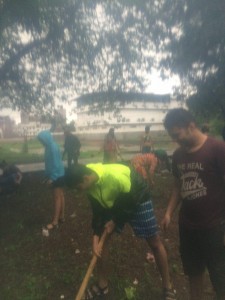