I agreed to volunteer for learning camps but that was not something that I was looking forward to. My friend explained me why it was important to invest in the education of these children and how much impact it can produce, so I did. I’m very self-oriented, and I only tend to do things that I like or I would learn from. But I decided to do this purely out of service.

I engaged in this activity of teaching them things that they would have not learn from their surroundings. I was able to engage a large group of 50 students, and that was quite an achievement for, since I have not always been confident about addressing a group of people. I also understood how privileged I was, and yet I used to complain about the smallest of things. I decided that I will put myself in the shoes of these kids and then look at the kind of problem I would be in.

I did Learning Camps for more than a month, and I began to consider that I took the right decision to be a part of the Learning Camps. As it started, I also began reflecting on what am I doing and how are they benefitting from this concept of Learning camps.

I had a discussion with Riya over phone and shared my opinions. We realised that it was not possible to give them full-fledged education of maths/sciences/english but we could instead give them crash courses – which they would love to attend and learn substantially from the process. And we also realised that these subject mostly won’t be relevant to them in their life.

So we redefined the goals of Learning camps to make them understand the world we live in, to equip them with the right kind of thoughts and mindset, to break stereotypes and prompt actions of social welfare.

If we could just make a dozen of kids good citizens and people of good character, that would make our efforts worth it. 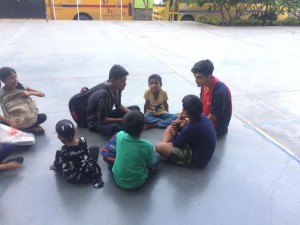