We had identified the gap in the market and the idea was ready – but months passed by and we hadn’t gone beyond planning. We investigated the idea, its viability, its lucrativeness, the market and the demand. Made a rough plan for marketing, operations and finance. It seemed doable and we gained confidence.

However, we were afraid to implement the event a large scale, since if not successful, we might incur a great loss. The idea was getting delayed but then, we made up our mind and made  a firm decision.

Initially we were planning to do it in a society, which had a good concrete ground, and almost perfect for a cage football tournament. However, we faced rejection from the society’s secretary despite several attempts. This what seemed as an obstacle turned out to be one of the main reasons for the event’s success.

We finalised another ground but because this was owned by a for-profit sports cafe, it demanded huge costs. It would cut our profit margins substantially, however we were destined to do it for the experience and learning. We also increased the registration prices.

We were able to held a tournament of 32 football teams, with city-wide marketing. The players seemed satisfied with the how the event was conducted and that pleased me. 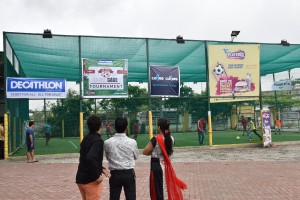 Doing business with the owner of the cafe, we learned tremendous number of things. I learnt the importance of maintaining good relations with the one in power, I learnt that people are not the way they showcase themselves, I learnt analysing what people say from a business perspective, I learnt negotiating, I learnt many skills particular to organising a sports tournament, and much more.  We also acquired practical knowledge of various things of that business concepts I had studied.

The first time we went to approach a firm for sponsorship, we were really unconfident and if they said they were not interested, we would just nod and go away. It felt very uncomfortable to go to so many shops and face rejection. I just didn’t want to do it anymore. But we continued thinking that there’s no harm just asking. We began having better sponsorship pitch after every rejection, we persuaded greater, analysed our shortcomings and improved the benefits we provided. I could say that if we had not continued due to initial rejections, the event wouldn’t have been successfully implemented.

I also identified that I had a thing for designing. I went on to design all the social media and print materials for the event, which attracted a lot of attention. 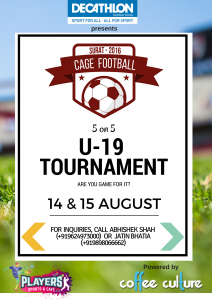 On-day crisis, we happened to arrive a little late at the venue, and we were supposed to hang 5 banners on the cage. We were able to put 3 banners before the first match, and one banner was supposed to be hung inside, where the match was going on. So during the half-time of the matches, we rushed inside with the ladder and somehow tied 2 sides. Then again in the next match, we tied another 2 parts. This way, we managed to save up on the turf-time.

We had only 12 hours of booking and 16 matches were scheduled very tightly that we couldn’t afford wasting time. So at various times, we shortened the half-time breaks, took the photo-session outside the cage, called all teams to report 1 hour before time, among others complete the matches in a timely manner.

We worked insanely hard in the last 3 days. Amidst the hassles, we forgot to print banners for one of the sponsor. When he got to know, he got very furious and said he wouldn’t bring the footballs and trophies that he had sponsored if his banner is not made. It was 10 in the night and all printing shops were closed. We were able to manage the print from a shop, which was 30km away.

What I learnt and experienced was way more than what I wrote in the reflection – all I can say is that I has made me competent to organise a even bigger and better event. 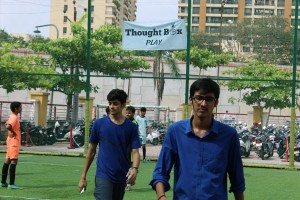 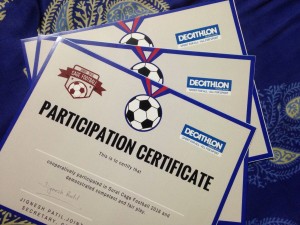