Our CAS project was all about organizing a kabaddi tournament in our school. The whole process was to lengthy and which was became a bit boring but in the when it eventually ended i had good feeling and a sigh of relief. Kabaddi is a indian sport which got famous in past 2 year due to international tournament called PRO KABADDI!!! This was our one of the major influence which lead us to organizing this tournament. So being not so popular sport in our school became our one of the major challenge for our group which were my classmates Anay, Varun and I who needed to face this.

We chipped in our ideas and finalised our project on Kabaddi Tournament. We needed co-ordination in our group as we had to plan a lot for the tournament. We needed to finalise the venue, also needed to advertise, make the teams. We short down the possible venues that we can organize this tournament in. We came up with three options for our safe side. Where our first venue request was rejected which was of assembly and the other option was PE area which was approved by our sports faculty which completed our part of venue.

We simply executed three different advertising strategies, posters, online awareness and the word of mouth. First two strategy were easily applied but when it came to word of mouth all three of us had problem in speaking to unfamiliar audience. To beat the fear we aloted each of us some classes were we had to announce the competition details which was much more difficult than it seems. Finally we listed the participants but when we gathered and cleared out the doubts about the possible injuries and risk during the tournament. Some people took their names back and unregistered. So we atlast end up with 30 contestant our hands.

At this point we needed to start collecting the charged money from the participants. We gave reminders through emails. We had to tackle the problem of collecting money as each student were in different grade and section. It was one of the big challenge to face and by the proactiveness of the participants we were able to collect it on time. From the fund we were giving rewards like best raider defender and the winning prize for the winning team.

Now this was the stage of making teams fairly which couldn’t have become interesting enough if wouldn’t have included auction into it. As auction are much fair than making teams by ourself. As we decided 5 captains from 30 students on the basis of their capabilities.

I had to handle the post of the referee and even needed to manage the tournament and see that all the participants are on time and referees are available who knew the rule. My whole commitment was to give my best while referee sitting . We tried our best to be fair and square towards each and every participant.

Finally we had 5 teams and we are ready to start the tournament. So all we were left to decide the type of tournament and the fixtures. We decided that we will have knockout and league. First their will be knockout between 4 teams and 1 team who wins the coin toss will straight away got to league and other 2 teams from 4 will fight their way in the league and fromthat winner will be chosen. According to the structure of the tournament fixtures were decided but due to school academics meeting the fixture had to rearranged according to the dates of meeting. This became a hurdle in our project and delayed the matches which we eventually crossed.

So this was the time all the matches took place. Keeping in mind of ethical objectives to be fair during the whole journey of this tournament. We had closing ceremony where we rewarded the winning team and the best raider and defender. It was a great experience as we had exposer of taking spontaneous decisions and build great communication skills. We got know about the talent that players from different grades had which were unpredictable. I felt amazing as the tournament was finished and now we no more had to do multitasking work between our studies and tournament.

Our motive was to not only promote kabaddi as a sport, to encourage gender equality. As we had girls participating we were trying to bring a change in our surroundings. We also tried to cater to global issue in our society as girls are as good as boys and their are women even better men which is totally normal. Which we tried to break the stereotype as we had female participants which were doing extremely well. As they gave a tough competition to any gender who came across. This was to promote gender equality throughout the event which proved when invited any gender participant could participate in the tournament. This event made feel that i achieved something and by slowly taking action could  not only encourage girls to play kabaddi but also to encourage equality between two genders. This made me feel proud about the results of our action.

We earned profits which weren’t expected. We as a group decided to chose to buy stationery from our whole profit and donate to children. this was one more step closer to bring joy in children life and have an impact over society in positive way. We earned 1000 rupees, which were fully used to buy stationary, The fact that we again dealt with an issue of poverty. The moment i could never forget is when i saw a smile on the kid’s face which wasn’t going. At this moment i gained respect for things that i have which i have been exploiting for years. This not only makes me feel proud but also excited to conduct more activities of this type. I could proudly say that it was a successful event followed by a donation made the event valuable. I would be keen to do this type of events more often. 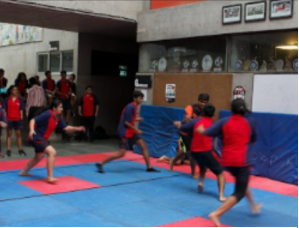 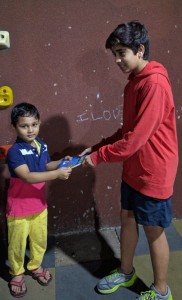