I took part in a french cooking event where we had to cook a french dish from scratch in groups. This was an event which was organized by students who took French to promote the french culture, who ever wanted to take part in this event had to be in one of the french student’s group and we had to cook a french dish(the dish was decided by the french student) from scratch without any help of our teachers. When I got to know about this event I was one of the first people who wanted to volunteer for the event. Because I want to pursue Hospitality as my career, so taking part in this event gave me some new exposure about cooking(without an expert’s help) and working in a actual kitchen. I also wanted to learn about new cuisines that I have never learnt before. Before the event started I was very excited as I was going to be learning something new in my life and I was going to be cooking with my friends.

As the event started first we collaboratively decided who will do what so that there is less time wastage. We divided the roles equally so that every member in the group would have the same amount of work and no one would feel left out. My role was to cut all the vegetables and cook them. Everything was going smoothly everyone were doing their job perfectly, but after half an hour we found out that the person who bought and brought the ingredients(the french student) forgot to get the main item for the dish! Everyone started panicking as there was just 45 minutes left and without that ingredient we couldn’t finish our dish. Meanwhile we were thinking about what to do and how to finish this dish, then my friend and I came up with a dish which did not include that ingredient and was a french. When the group members heard about the dish everyone sparkled up and started working on it. We completed our dish just in time and everybody loved it. We as a group were very proud of ourselves because we worked organized and quick, as we know each other as a group we functioned nicely as we knew each other’s strengths and weakness. We also tried to save and not waste the resources that we had and that we got from the school for example- the ingredients, water, vessels etc.

I learnt many new thing from this event. I learnt how to cook in a group as I have never done that before, I also learnt how to cook at a proper kitchen. I also developed quick thinking skills- when we found out that the original dish would not be completed everyone started panicking but my friend and I didn’t panic and started to think of a different dish that we could cook. I think that this event gave me an exposure of how to work collaborate in a big real kitchen, this would help me in future as I want to pursue hospitality. To end it was a fun event overall. 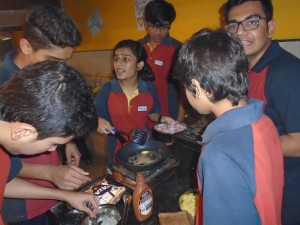