I have been seeing different flashmob in the different occasion where my friends were taking part in. I sort of had an idea about how could we make a flash mob blast in any type of audience. That opportunity was given to me by my friends were they asked me to choreograph a dance for a social cause which was about saving girl child. This time instead of performing in a mall we decided to perform in our school on the day Garba fest.

One of our friends organised this event in school on the 10th of October and they allowed us to crash their event and perform a flash mob. Volunteers were gathered from the word of mouth and survey conducted from the mail. This time we were a group of only 20 members. As this was a really huge event organized by my friends. we had to give our 100% to grab the audience’s attention. The challenges that I faced during the last flash mob were not because of the practice sessions or the time management but because of my academics. Managing the event and preparing for exams simultaneously was a difficult job. Nevertheless, like before as a team we gave in our 100% and cooperated with each other to make this last flash mob a perfect one. Women empowerment was our issue for this flash mob. In order to begin from home we took this up as our issue for performance in school because this is that one place where we study about women being discriminated and treated badly all over the world.

Facing ups and downs, overcoming all the challenges that came in our way as a team we created ASTH. All of us had different strengths and weaknesses. Combining all the strengths and eliminating all the weakness we made these series of events successful. This activity has given me a lot to remember. During the entire journey of performing flash mobs for social cause, apart from learning I have made some beautiful memories. By taking responsibility to choreograph and also had a good time making new friends during this journey. 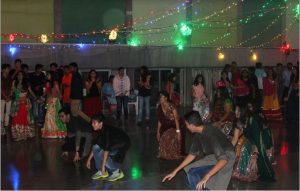