Second football competition “Khel Mahakumbh”. Now I knew each and everyone in my new school, especially football players. This was the second football tournament which happens only in Gujarat. This one of the most popular football cup and I have always tried to win it I could never win it as my team was not up to the level. This time I was confident as there three coaches in the playing 11 so our team had good defence. This time I was playing in the left wing mid position which was one of my favourite positions to play. I was hoping to win this game, but I never thought that i would actually win this tournament. I got an injury because of my football boots. Then I just stopped playing as it was burning a lot even I was walking. Through my body language our coach/team captain smartly substituted me with a defender and sent a player to my position. I took rest for the whole match.

Slots for this tournament were given as we were given in the subroto cup. This time we had more slots in our hand so we practiced every aspect of football. This time the ethical issues were not there as we were in the open category, which meant that anyone could play in the tournament, but now the issue arose was are the players from the same school that they are playing for, Identity cards were checked by the coaches and one of the team was discarded too. I had my new studs on and I was not too comfortable with them, which was one major distraction for me while playing football, but then I focused more the football and kept in running every time, so that I get used to it.

Finally we won the entire tournament and our team got 50,000 rupees along with the championship trophy. We all got equal amount from the price won.The winning team also gets to go the state levels but at the end we had to cancel it as twelfth grade students were busy with their final submissions. 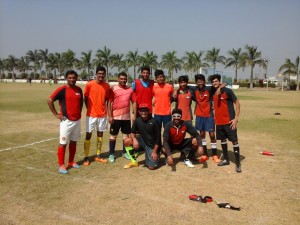