It was a long ride, we were expected to reach around 6 in the evening. Nobody was sure whether we would win the competition this time (as we have been winning since last 2 years and then going for Nationals) because we didn’t have all the best players of the team. We had a new goal keeper with whom we played for the first time. Also that we didn’t have any practice together as a team, so we lacked coordination. On the way, I saw these beautiful meadows covered in waste. Plastic, old clothes, rotten food and other junk. Then we decided that any waste that we have, we’ll throw it in the dustbin only. Our country, our responsibility. These small actions have at least a minor global impact. We reached and we all were horror-struck. The ground was small and in the middle of the it was a cricket pitch (of concrete), so if we fell we would be severely injured. The accommodations that they provided for the teams to stay were terrible. One room, 2 fans, 18 girls, 2 coaches, dirty floor, dirty mattresses. How can one live in that? We went looking for a decent hotel to spend the night.

Next morning, we reached the field, applied loads of sunscreen. As I am a regular football player and attend many state level competition, I have made many friends from across India, especially in Gujarat form all cities. When I met them there, I got more nervous, they knew me and so the pressure to perform good was heavy. Their team coaches also knew me and wished us luck. I was scared about my performance, we hadn’t practiced as a team, more specifically I wanted my game to be great.

First match against Anand, fromt the first minute we got to know that we were stronger than them, so we decided to develop coordination between our team members. After scoring 2 goals, our main aim was to pass accurately and make attempts to score. Anwer sir was kinda satisfied because he thought that it was good to get a easy team to start with so that we all could play more easily with each other. After we won the first match, we were a bit more confident. We won the second match against Kutch. Coach was happy with my game, I played the position of a midfielder and did my job perfectly well. I was satisfied with my performance and extremely tired too.We were all ready for the third match and got the news that the home team hadn’t shown up. We were all pretty confident on winning. Few were also overconfident because we had won this tournament last year, and this time we were already in semi-finals.

Next day, there were blisters on my foot. Everybody was excited yet scared. Few people had started making plans about how much fun they are going to have at nationals. I didn’t play good in this match according to my coach, he constantly kept shouting from outside the field about me making mistakes. I am the main player of the team, the heart of the team – as our coach put it. I take all the kicks and all the throws which made me use all my energy so I was immensely tired. I still tried my best, and after we won and were sitting together where sir admitted that I played tough, which was good to hear after a tiring match.

For the finals I was having a hard time to even keep my eyes open while playing, because I just wanted to sleep. Blisters throbbed and I could pass the ball but not kick it with power. Sir was disappointed with me and that was evident because he constantly kept shouting my name and instructed me what to do. Their attacks were constant and we had started to play a defensive game. Till half-time we had held them back and the score was nil-nil. As the 2nd half began, I couldn’t defend very well so I was sent to strike and a player from the strike was sent for defence. They scored easy goals. Our coordination was less and mistakes were more.

The one thing that we all were very satisfied was the cleanliness that we maintained everywhere we went. We realised that the every action and choice we make has an impact, and it unethical to dirty someone’s home place. It is against our morals.

Overall, it was a great experience. I realised I need to increase my stamina to a great extent because I got tired in the second match itself. The most important thing that I learned was accepting failure. We always win, there is not a single match that I remember that we lost – so losing this was altogether a new experience. It was disappointing and sad, but it was necessary for us to face failure in life and be able to live with that. There is so much a sport can teach you about life. 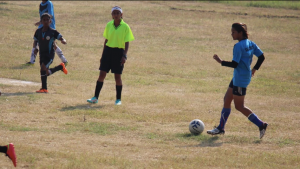