Teaching to students has always been a tedious work for someone, while for other it’s passion but at the end they need some rest & that is why we Disha Sarawagi, Khushali Chaliawala and I made a plan to give teacher a while off from their work and give them a treat and happiness which they truly deserve.

It was very important to know what we three people were good at so we could easily focus the strong part and then work efficiently. Being not good at drawing and in art Khushali and Disha took the responsibility to make an art piece for the invitation card, so I started off working on the student replacing teachers where senior most students were going to teach to their juniors and I took the responsibility with the IT handling, in that making groups and assigning works with the classes to the seniors was one of the difficult task, because they have to be briefed properly and no error should be there. Though after seeing the Invitation card I would like to work upon my drawings.

This was the first time I’ve experienced and conducted an event and being the first time new challenges were there which is nowhere similar which I’ve done something before. We had 4 days left to the event and we had to rush everything and had to make a proper schedule for the event day as to add icing to the cake we included dance, drama and band performances presented by the middle year students. Dance and Drama need practices so to present it better new ideas should be inputted so we put ideas of the recent news and for the band performances students played teacher’s favorite songs, so to play that in just 4 days and in that an instrument keyboard which I’ve played for at least 8 years I indulge into the band and gave them chords and improve some mistake that’s where I also developed new skills as I learned some new chords, I felt challenging too, as they had learnt the new types of chords- basically shortcuts for chords, so it was somewhat difficult to communicate but then it was somewhere similar too.

Planning in 4 days was indeed a very difficult task, as we also had classes and was a working day so to manage, we assigned tasks to each other. I started off working by by handling the student name sheet and assigning them classes. A fixed budget was given to us so we thought of something creative and came up with  photo booth which was the best part for teachers as well senior students where they use props and take pictures. So we bought and made some props for them. As this was my first cas experience so I do have to put all of my effort in it, whatever the work was given, from preparing a sheet, sending out emails to each and every student and making out time for decorations and much more. I was excited to learn new things with the organisers point of view, that how do they manage so I went up to our DP coordinator to learn and apply some things in the CAS experience and as a teacher’s point of view how they see us when they teach us. While working in a group you get more ideas as everyone has different types of experience where some of them could be applied in this activity. Photo booth was something new and everyone enjoyed so by that we could make it more interesting when working collaboratively. 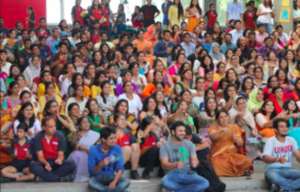