We were required to go to KV school for plantation early in the morning. There were couple of my friends. It was on weekends so we had sufficient time to complete the activity. All the resources were available there. We just had to be ready to work. There was struggle due to unfamiliar situation which made the activity more interesting.
As I have done plantation earlier, I was able to perform it without any hesitation so my strength was I had knowledge about techniques and method of plantation. I was able to put that knowledge into action.
The one of the difficulty we faced during the plantation was that it was monsoon season so there was heavy rain. I thought it is not possible to plant trees in rain because there was too much water water so water would fill up the hole and plant might not grow. But the sir told us it is not a problem if you plant in soil with lot of water. The water will be absorb by the soil later and plant would grow.
I always wanted to keep participating in any kind of plantation activity because trees have very important role in our life as we breath because of trees. It is essential for us to keep planting trees so that us and our next generations don’t face difficulty in the future.
As it was raining, digging and planting became difficult. It took lot more man power than it took during plantation activity in vansda so it tend to give us ideas to leave covering plant base in soil halfway. However, I still did not give up. I dig appropriate holes for all the trees I planted and covered it effectively. No matter how many obstacles there was we completed our task. The activity was tiring but it was satisfying and fun. 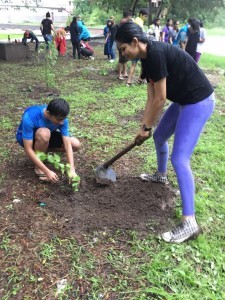 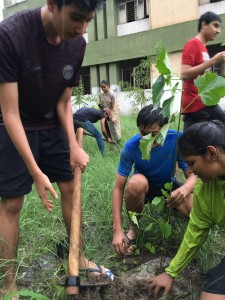