Access to quality education is a human right yet many are deprived of it. Education is quite vital for human beings because it does not just teach us about how the world works it also provides a path to success. I always wanted to contribute to the society for making it a better place so I thought what better than educating children. “Learning Camp” was an initiation by me and my friends where we taught the underprivileged students near our school different subjects such as English, ICT and character building. During the entire experience we faced a lot of difficulties. The first challenge we faced was how will we approach the underprivileged children because going to each and every house in the village was not a feasible option we decided to keep an introductory session with the parents of the children. The session was organized in the school where we persuaded all the parents to send their children for the camps and we ensured that that these camps would be fruitful for the children as they will learn new skills in different areas. I personally did not expect that the parents would be keen to send their children after long hours of school however it turns out I was wrong the parents were more than happy because they wanted that their children should learn new skills in subject like ICT.

After gathering several volunteers from our school we divided all the volunteers in three groups according to the subject we will teach which were ICT, English and Character Building. I was in charge of the ICT. We began with learning camps. During the time when I taught the children I found out that I had good leadership skills in me because I was able to handle approximately students and could make sure that children would always learn something new and helpful in the field of ICT. Also collaboratively with the other volunteers I designed a four week curriculum for the children which included learning about how internet works, how to create email id’s and some basics about computer programming. During learning camps I was able to learn new skills myself. I was able to learn new Gujarati words and could further improve my Gujarati while constantly communicating with children in the language. One of the biggest challenge during the learning camps was time management, as the learning camps took place after school hours I needed to stay back and because I reached home late I was not able to study so I decided to use some extra time in school such as free slots to ensure that my academics is not affected. Overall learning camps was one of my best experience because I learnt that there is no age for learning. 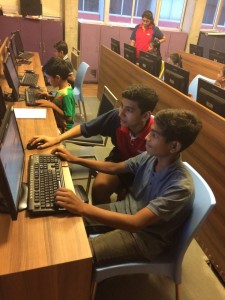