This was a short-term activity without any prior planning or preparation to it. When we reached there, I really admired the scenery. The landscaping was made to look natural but at the same time uniform. I felt pleasant and grew a desire to work for the environment which was what we were here for. I was aware of the environmental problems our earth was facing including global warming and I was motivated to contribute to a better environment by planting more trees within the city.

We were divided into two groups which reduced chaos and people had a better idea of their roles. I had a viewpoint that planting trees would be just sowing seeds in the ground but now I knew that hundreds of thousands of saplings were imported, packed in a plastic covering. We had to remove the plastic and sow the plant with the soil into the ground. This required four different activities so we divided ourselves likewise. We struggled but soon got hold of our activity. On seeing that one activity required more people, we transferred some more to that activity. We were working as a team and it was quick. It wouldn’t have been possible at this pace if every single individual did all the four activities. We had specialised in our part and it was more effective and also there was little to none moving from one place to another due to this. I, however, tried all the activities and it was enjoyable. I learnt to plough the soil, embedding saplings in the dug region, managing the soil with the plants to keep them in place, and finally covering them with more soil. If I had done a mistake and the sapling was planted improperly, I would remove it and do it again; I have always chosen to work with quality even if it took more time and efforts. 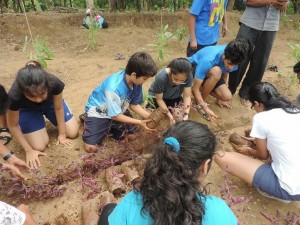 I had a very new experience of standing in a open truck while we go up and down the hill to bring a truckload more of plants. It was as amusing as it sounds. I have good strength and I used it to lift 8-9 plants at a time which saved a lot of time. I developed a sort of ignorance to insects and the dirty soil marks, which were on all of my body. I did not mind it that much after a time which seemed disgusting before today.

I was exhausted by working only for 3-4 hours and I recognized the efforts the workers put in when they worked the whole day for months. I developed empathy towards them and honoured the work they were doing. They were also kind to us and explained how the plants have to be planted in the best way. It felt good that we were extending a hand to help them and giving them a break so that they could relax for at least a day. I was tempted to draw away from work and just have fun like many were doing. But I sticked to the plan and what I had come here for, and did my part. I could escape the herd mentality because if I too started wandering around, maybe two to three more would follow and it would keep on increasing. This way we could not meet up with the aim we had in mind. Perhaps, seeing me work dedicatedly might also have encouraged others to work which I wouldn’t know. 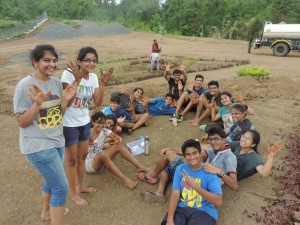