The concept of Literature and Humanities Fest was introduced this year in our school. the basic concept was to promote literature and humanities through varied fun activities. I organized two activities one of them was “Scrabble Wall”.

I am not really a fan of scrabble nor am I so interested in literature. This was the first challenge I faced  because I had to devote my free slots and play time to pull off an activity that I was not interested in or passionate about so this thought of me giving up my free time in a thing that did not interest me hold me back from giving my 100% towards organizing this activity. I had to pull this thing of with a partner so it was necessary that we coordinated well. But because she was in 10th she was busy most of the time as she had her boards this year. Initially, we weren’t able to put our best efforts. So there was a lack of coordination among both of us that delayed our work and made me anxious and at times, I messed things up. once I made a mistake while preparing the posters for our activity and once my partner had the duty to prepare charts for scrabble wall which she forgot and hadn’t done it like we planned and so we had to do it again. But then my partner made me realized that it wasn’t too late and we can still put up good activity.

After that I think we were able to coordinate well with each other because now that we understood each other we were able to divide work in such a way that it does not affect our other stuff (like at times when we had to meet our mentor teachers for updating and discussing our progress I volunteered to go alone as she had few tests during that time which were important for her and sometimes she did extra work because i had to complete some urgent submissions)  and tried to give our 100% and  also gave our free time not only at school but we also did few things from home as well and completed our work before our deadline. After going through this I had realized that how important teamwork is and how necessary it is to understand each other in order to ensure that the things go smoothly and as planned.

The second challenge was that students weren’t really interested in the fest like me but were dedicated towards earning points for their respective houses (the only reason so many students showed their interest in Lit.Hum fest) but the activity that we were organizing wouldn’t help them earn those points as it was a fun activity and so it was very difficult to convince students to participate in it. As a result, it was not a big hit initially nor in the later stage but after some time we received better responses from students than earlier as our mentor teacher Smruti ma’am started playing herself with few of her grade 12 students which encouraged others to come and play. earlier when did not receive any response I panicked and was really sad as it was the very first time I volunteered to organize something on my own and it failed. The idea of failure highly demotivated me but then I realized that it was my first try (we all learn from mistakes right!) and now because I have experienced it once I will have a good idea how to go about organizing an event.

The kids from grade 7 and 8 didn’t quite understand it and were playing it their way. I didn’t try to stop them because at the end what would matter is that they had fun (right!). And once in awhile a lot, them cheated as well in order to win those badges that we gave to those who win but again it the aim was that these kids should enjoy so we gave them badges even though we knew that they cheated. So this was like an ethical issue.

Planning this event was a challenge for me because I haven’t done anything like this before but taught me few things: I learned to keep calm in situations that are not wanted and handle them wisely and smartly. Overall, I am satisfied with my performance. 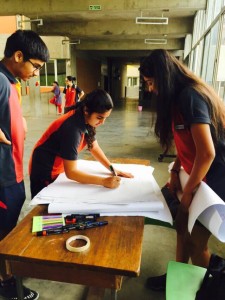 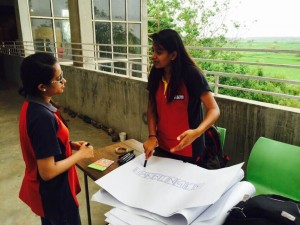