I participated in an U-19 inter-school basketball competition which was organised by School Games Federation of India.

For the first time, I had made my way into the school basketball squad and got the honours to represent my school. I was absolutely thrilled to find my name in the roster for this tournament. I had been practicing a new sport(basketball) for a brief period of time and had improved my game to certain extent, justifying my selection.

We had to travel a good 50 km in the morning to reach the venue of the competition. It was fun to travel with my team mates as well as the school coach.

Earlier, I did not use to understand how players with fantastic basketball skills were not able to perform in competitive games but as soon as I was put on the basketball court, I realized that the pressure to perform existed across all of the sports.  I understood and identified my strength as a rebounder and played accordingly. It was a challenge upon me to perform on my school debut. I had also zeroed on my weaknesses that were pointed out by my well wishers and hence decided to work on them.

I recognized the significance of playing fairly, safely and within the ethical borders. I had cut my nails, removed my wrist watch, and gave the respect the opponent players deserved. I had put playing with integrity as my top priority, even if we we were on the losing side. I intended to avoid physical contact with opponents and was fairly successful in doing so.

The format which was followed was of knockouts. We won three games on the trot to book a spot for ourselves in the final of competition. We all had a fair chance to demonstrate our strengths to the selectors present there. We also had planned out strategies and tactics and exhibited them to a satisfactory level. Unfortunately, we lost the finals but had got a huge chunk of things to go home with, such as: our strengths, co ordination, game skills, etc.

It was an amazing experience overall and I hope to continue grasping more and more from this sport. 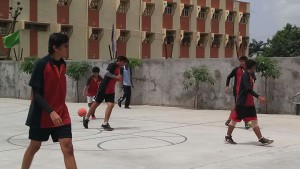 Walking up to take positions in offense. 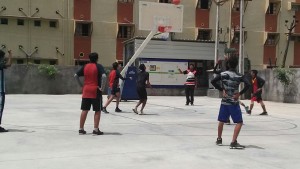 Going for a rebound.