The event consisted of 2 members for each team. One partner had to run 5 kilometers and the other had to cycle 10 kilometers. I previously had the practice of running only 2 kilometers at a stretch so completing 5 kilometers seemed like a huge task but I decided to start practicing every morning and evening. Initially, it was very difficult to wake up early in the morning and then go running. I would feel extremely sleepy at school in the day. Running in the evening also proved to be a difficult idea since the roads would be extremely crowded and it would be difficult to complete the distance without breaks.

After seven weeks of pushing myself to my limits, I managed to practice along with my partner and completed the Duathlon. It was a feeling of immense pride and satisfaction. However, my achievement was not the one that was the most satisfactory. It was my parents who on being pushed hard completed the duathlon and overcame the limits age sets.

I learned to work collaboratively with a team since I had to be on time for my training practices with my companions and also followed the rules they abide by which were to run at the decided pace and to give the full amount of time required. I attended all practice sessions regularly and took responsibility for any problems that arose.

Since a pollution free world is what the entire globe is aiming for and by participating in an event such as this one, we come one step closer to creating more awareness of the impending disaster to earth. 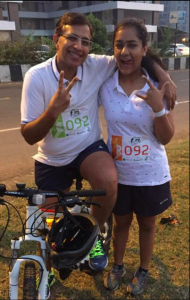